Saturday at BARC Shelter: Reiki with a Rescued Bird 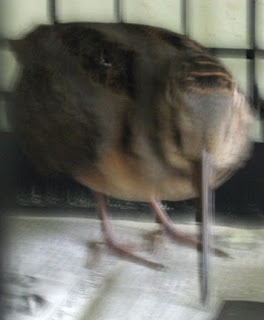 Saturday I was at BARC shelter in Brooklyn and while I was there, this little bird was rescued from the streets. Apparently it has a problem with one of its wings, I think. I'm not sure what kind of bird it is but it definitely doesn't look like a species native to Brooklyn!
I was asked if I wanted to do a treatment on it and of course I was only too happy to do this. The bird seemed friendly but I didn't want to startle it by trying to touch it, so I did Reiki from a short distance. I was careful to try not to overpower it with too much energy, as it is a much smaller creature than a dog or cat.
It was very interesting what happened. The bird had just recently been put into a cage and was walking around exploring the small space, looking at food and water that had been left for it but not eating or drinking, just walking around.
I started letting Reiki flow from my hands. I was standing with the cage door open but dod not put my hands inside. The bird began to walk less frantically little by little, then suddenly just stood in place, absolutely still, though not stiffly so, receiving the Reiki energy. I stayed there for just a short while, as the shelter was soon closing, but I could feel the energy passing from me to the bird and back to me, connecting us. All the while I was saying to the bird, partly out loud and partly with my mind, that it was in a safe place and that it would be taken care of. When it was time to leave, I said good night and it began to move a little again, but it seem to be calmer than it had been.
Posted by sarahsuricat at 11:37 AM