The Cat Loft at BARC: Patches Settles in my Lap 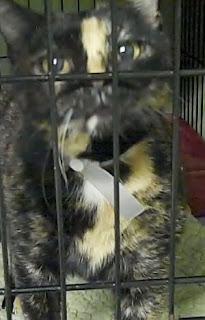 Patches is one of the beautiful cats at BARC who I have had the opportunity to work with lately. She came to BARC from an abusive situation. Sometimes she can suddenly become very frightened. She is particularly frightened of other cats, but can usually only tolerate short amounts of attention, so one needs to really be patient with her.

I have been doing both TTouch and Reiki with her recently. Generally I will do TTouches on her head, then do some Reiki on her body, and when she is comfortable, do some TTouch on her body. She is more comfortable being touched on the head than on the body, so this approach gives her time to settle and get used to being gently touched on her body.

Recently she was put in a cage on the lower level, which enables people to sit in a chair right at the same level as her cage and if she is comfortable she can come out onto a person's lap, which she has done for several people, including me, lately. The other day, she did that for me the first time, and I realized that I needed to have her face her cage or the wall when she is on my lap so she will not be scared by seeing the other cats who are out loose. 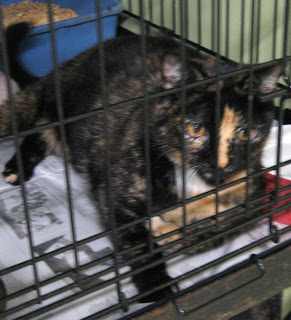 So yesterday when she came onto my lap, I made sure that she was facing her cage once she came onto my lap, and I decided to offer her Reiki. She settled and absorbed Reiki more than ever before. She settled and spread out in my lap, draping her front legs over my knees. It was as though her entire being let out a gigantic SIGH. She was purring a beautiful silent vibrating PURRRRRR. There were no visitors at that particular time, which gave her more opportunity to really BREATHE and relax. Even a couple of the other cats who are loose in the space who usually come up to me when I have another cat on my lap were curled up taking a nap. It was so sweet to truly feel this cat relax - that she felt safe enough to do that with me. I moved my hands to several positions while she was there, but it felt that the optimum position for my hands was around her shoulder area (which is also the brachial chakra). Patches did not want to move, even after we had remained there for a very long time. I did a few TTouches on her, but it felt like she was so responsive to Reiki that I mostly continued Reiki with her. 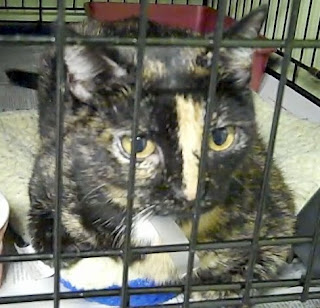 Finally I gently lifted her back into her cage. Here she is (pic directly above, as well as top pic in this post) shortly afterwards. Her eyes are just so open and expressive. I feel that if a very patient, quiet person were to adopt her, she would do very well in a home with no other animals. She feels like she is so craving of that connection.

Thank you Patches for trusting me in these moments, and thanks to the others who come to BARC to help socialize these cats as well.
Posted by sarahsuricat at 2:06 PM