Kane and his lovely owner Zoie were another pair I worked with during Kathy Cascade's TTouch training. They have been in two previous TTouch trainings with me, and I have been glad to get to know Kane and Zoie over this time, and to see both Kane's and Zoie's progress in doing this work. 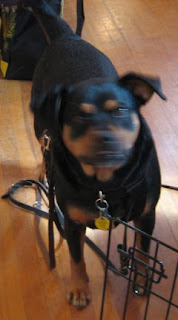 Kane is a young, strong, energetic dog and can really be challenging when he starts to pull on the leash as he is so strong. When Zoie and Kane arrived for the training, I held Kane on the leash for her while she was unpacking, and wow, I could feel how strong he was. I had to keep myself grounded in order to not have him take off with me flying in the air on the back of the leash :) and I was happy to work with Zoie and Kane with Kathy's direction in order to learn how to best work with Kane to keep everyone in balance.
Zoie and I started out by doing homing pigoen with Kane. I started out in the leading position, on the right hand side of Kane with two points of contact on his harness, and Zoie was on the other side of Kane in a neutral position, connected to his collar with another leash. Kane seemed to get faster and faster and more and more out of our control. After Kathy suggested walking in S-curves with Kane, instead of just straight forward, it felt like a miracle. Walking in s-curves with your dog forces the dog to think instead of just charging forward, and the constant changing of orientation that the s-curves provide make the dog continue to be conscious of its motion and pay attention to where it is being asked to go.
Now it felt like Zoie, Kane, and I became one unit, all being in balance and moving together, instead of Zoie and I chasing after Kane and feeling like he was pulling us on the leash. Everything just felt like it clicked into place and we were all right in synch in the moment, Below is Kane later that day, saying "OH YEAH!". Thank you Zoie, Kane and Kathy for teaching me so much with this experience. 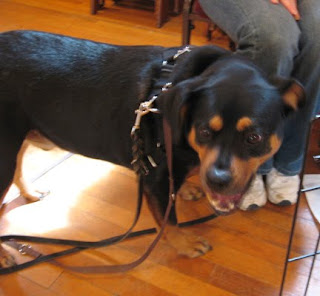 Posted by sarahsuricat at 11:42 AM