The other day I went again to do TTouch on some cats through Tavi & Friends, through their TTouch-in-Rescue™ program to provide TTouch® to the animals of one of TaF's partner groups, the Mayor's Alliance for NYC's Animals. These cats are temporarily at a boarding facility until they can be sent to various rescue groups or sent out to an adoption event, etc. Some of them are quite friendly and others need a great deal of socialization.

There were some cats who I had worked on before and some others who I hadn't met. Porter, who I worked on last time, has continued to make progress due to the other Tavi folks and other volunteers who have been working with him. He still needs time-out from being touched sometimes, so it is really best to just touch him a bit, give him a break, then continue. But he is very curious and seeking attention now, whereas in the beginning he was in the back of his cage, terrified.

The amazing-looking fellow below is named Zorro, and you can see why he has his name! When I opened his cage, he was sitting in the back. His cage had just been cleaned and so I think that had made him a little unsure. So I started out with him slowly, working with chimp touches on his head, doing some ear strokes and doing some Noah's marches with the back of my hand down his body. As I worked on him, he came more and more forward in the cage, and finally flopped on his back. At that point, I went back to working on his head and he was VERY relaxed. 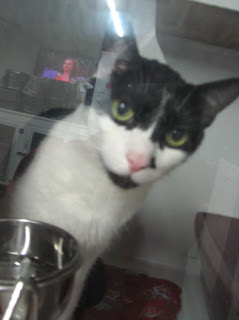 The cat below is named Chubby. There was a sign on his cage saying he was frightened and that he shouldn't be let out with the other cats. He turned out to be completely friendly, and in no time was pushing his head into my hand and asking for more attention. Perhaps he is afraid of other cats, not other people, as he is declawed. What a sweet boy! 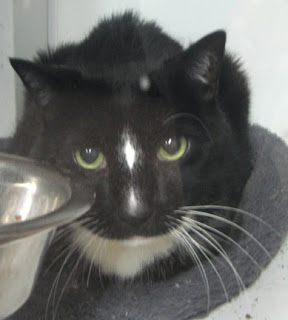 The fellow below is named Jack White. He was waiting at the front of his cage for some attention. He pushed his head into my hand and I was able to do touches all over his head and body, and he really responded to that. Later on, I found out that this lovely boy as well as several others there were most likely going to be adopted soon, yay. 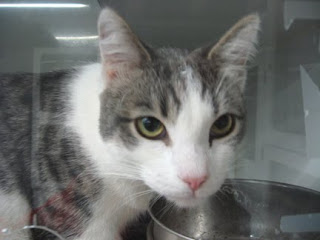 The little girl below named Isabel is at a point where I have seen a lot of other cats get who seem to want contact, but they are still unsure. She is very playful, and is confident enough to come close to you to reach what she thinks is a toy. She wants to engage in play if I put in a tool like a paintbrush or wand, but she still was a little frightened of being touched. So I played with her and touched her a little :)
After trying several different tools with her, I found that she was comfortable with me doing a few touches at a time with a soft makeup brush, as that provided some distance, but a nice soft surface. I look forward to working with her futher and with the other cats. 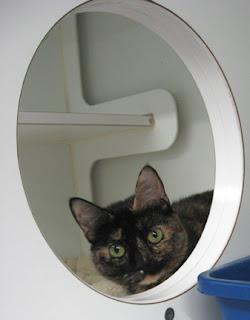 Posted by sarahsuricat at 12:30 PM