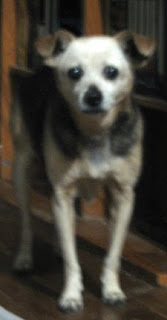 Tiffany is an extremely fearful Chihuahua mix (larger than a Chihuahua, and as you can see, her legs are quite long) who recently arrived at Social Tees shelter. She appears to have been abused by a man or men, as she is particularly fearful of and reactive to men. From what I have observed, she isn't reactive to other dogs, just will run away and hide from them if she is scared. I have worked with her several times for an extended period, very slowly, and never approaching her directly, letting her come to me as she is comfortable. Other times, if I am in a room working with another dog or she happens to come up to me, I say hello to her in a gentle, friendly voice and do not look at her directly. A few times, when I have been working on another dog, she has been hanging out near by, and she has been comfortable with me getting closer and closer to where she is while I am working on another dog, which usually ends up with a couple of other dogs hanging out near me as well, so this is a big step for her, having me and several dogs in close proximity to her and she feels safe enough not to walk away.
The first time I worked with her in a more concentrated way, she and I were alone out in the backyard of the shelter. She was standing in a corner, and I was pretty much at the opposite end of the yard from her. I began to speak to her very softly, telling her what a wonderful, sweet dog she is, and telling her that she was safe. I began to feel energy going from my hands to her body, and was picturing that contact sending warm light into her body. After a short time, I could see her start to breathe more fully. I was crouched on the floor, facing pretty much sideways. I was feeling from her that she had not been relaxed in a LONG time and that she was finally relaxing. She laid down and put her head down for a nap. I was continuing to feel Reiki flowing from my hands. I turned nearly with my back to her, kept speaking occasionally to her in a soft voice, and was able to slowly back towards where she was. I got within about a foot of her and just stayed there for a while. She appeared to still be comfortable, was still lying down, relaxing. One of the other wonderful volunteers, Estee, came out at that point and I signaled to her to move slowly and speak quietly, and she did, and the dog continued to be comfortable. This felt like a big step for Tiffany.
The second time I worked with her was a couple of days ago. There was only one other person with me in the shelter and so it was quieter than usual. Tiffany was following me around for a lot of the day. She is still very frightened and did not have her tail up but yet she seemed to want to be near me. I would say hi to her from time to time but didn't want to startle her and make her run away so I didn't say too much, just let her come around with me. At one point when I was done with what I had to do, I kneeled down sideways to her and began to speak to her. She came closer and closer and laid right down next to me. I kept picturing Reiki flowing from me to her, filling her with light. We stayed there for some time, she was very relaxed.
It is going to take this girl a long time to be ok around people, but fortunately I am working at a no-kill shelter, so we can work with her slowly and patiently.
Posted by sarahsuricat at 9:39 AM