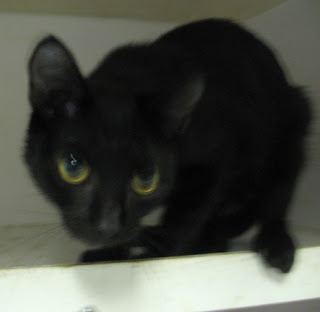 Sparkle is one of the more challenging kitties I have worked with. When she arrived, she was 2 1/2 to three months old and, I think, completely feral. She was absolutely terrified of any contact whatsoever. She was always hunched up in the back of the cage and hissed and swatted at any motion anywhere in her direction. I started out working with her with feathers, back scratcher, a dowel with an ace bandage on it, etc and could only do a few touches at a time at first. She seemed to like the back of the hand of the back scratcher and I found I could calm the hissing by doing little circles on her forehead and around her ears with that.

We thought we could help her by putting her with a friendly cat, so we put her with Wally, a friendly grey and white guy who is maybe 2-3 years old, and before long, they were cuddling together. He made her much more at ease and though she still would hiss upon having her cage opened, you could tell she was much more comfortable and she has become increasingly playful. Now she is very often right in the front of her cage, acting very playful, sticking her paw out and trying to play with cats on either side.

Little by little I worked up to having more and more contact with her, until I was doing TTouch on her using gardening gloves to protect my hands. Lately I have been able to do TTouch on her using my hand with no gloves, doing little raccoon touches around her forehead, neck, mouth, as well as some ear strokes.

Yesterday I had a big surprise. I began with Sparkle doing the raccoon touches on her head, and felt her being more receptive to me, without the initial resistance of one hiss-swat and then a little flinch, which relaxes once I touch her. sooo I decided to take the next step, and began doing some connected chimp touches and clouded leopard touches going down one side of her body, and the other, and felt her actually relax into it. I didn't continue too long as I didn't want to push the issue, so I gave her a break and then was able to do this again. I also was able to do ear strokes on her with a more firm touch than I had ever been able to do before. Her friend Wally even seemed to look at me as though he was a bit surprised :)

This girl has come such a long way and I thank her for trusting me and I look forward to continuing to work with her :)
Posted by sarahsuricat at 10:13 AM