TTouch, Reiki and Cat Sitting with Krishna, Nov: Day one 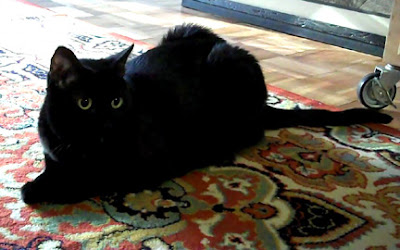 Today was my first day cat sitting with Krishna, a cat who I have worked with and cat-sat for before, and then recently had an appointment with. He is generally fearful of people other than Rebecca and Tim, his guardians, but I have been able to get closer and closer to him the longer I work with him.

When I first arrived, he seemed a bit scared, so I sent him Reiki from across the room, and he began to calm, rubbing his body against a wall and stretching out. After giving him food and water, scooping the litter etc. we settled down for a play/TTouch/Reiki session. 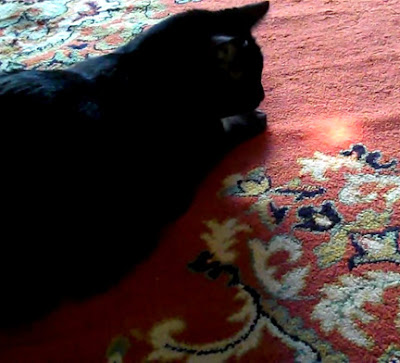 Last time I cat-sat for him I discovered that he loves to chase the light from a flashlight, so this is how I started out with him. I thought it might be good to get some of his nervous energy out before trying some Reiki and TTouch. He really got into it, chasing all over the place.
It is interesting too, as he clearly realizes where the light is coming from. If I stop, and put the flashlight down, he comes towards the flashlight and nudges it towards me, to encourage me to continue. 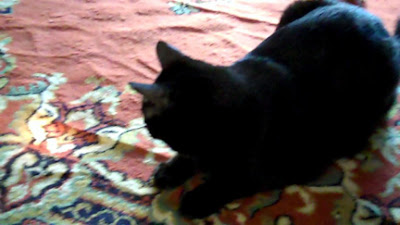 After playing, I began to send him some Reiki from a short distance and he began to calm, stretching out on the carpet.

Then he went under a stool, one of the places he likes to go to feel safe. I began to do some TTouch with the paintbrush, doing a little bit at a time, then stopping, then starting again. 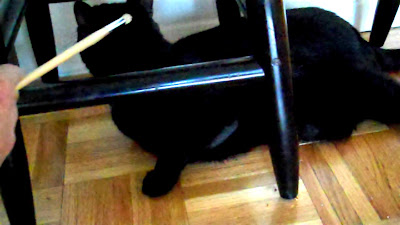 As we went, I sometimes incorporated some a few circles or strokes on the body as well, then went back to the head. 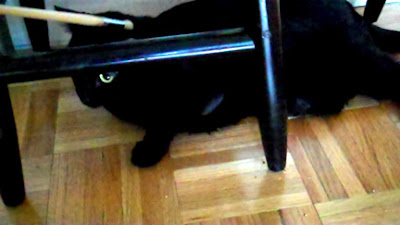 Giving him frequent breaks felt very key, as he is so ultra-sensitive, and can become over-stimulated quite easily. So I would just do a few touches or strokes, then stop, then start again. 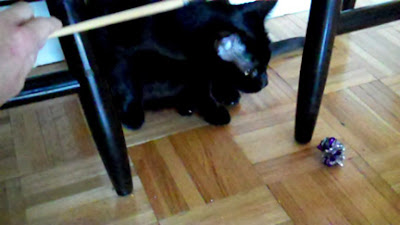 Sometimes during the breaks, he would come towards me and put a paw out or do something else which felt like he thought we were playing a game and he was ready for more. Sometimes he would start to play with the tool, especially when I tried touching him with a dowel with a bit of ACE bandage on the end, so I would then give him a break, then went back to using the paintbrush. Always keep in mind that the touch is done very lightly with TTouch, as you are connecting with the nervous system, not the muscular system.

After we were done, I gave him the rest of his food, which he readily went to eat, which was a great sign.

See ya tomorrow, Krishna! xo
Posted by sarahsuricat at 12:02 PM