TTouch and Reiki at BARC Shelter: A Quiet Connection with Abby 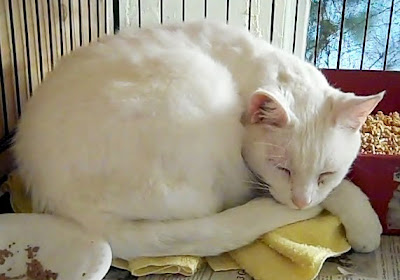 Abby is a dear white senior cat at BARC Shelter. He arrived at the shelter after his owner passed away. He is quite a sensitive kitty, and, though he is friendly with people, he appears to be frightened of other cats and of dogs. He can also become overwhelmed if approached with energy that is too intense. It is easy to imagine that this transition must have been so difficult for him.

So I started out with him in a very gentle way, sending him Reiki energy from a short distance away. He sensed the energy right away and smelled my hands, as though he was smelling the energy. He came closer and closer to me until he was cuddled around my hands and arms, and he stretched out for a snooze. I felt such a deep calm in him, and a bubble of calm energy around us. This was so lovely to feel and see.

The next time I worked with him, the same thing happened, he came forward to sniff the energy, then became entertwined in my hands and arms. I had my elbows bent, resting on the bottom of the cage and my hands facing either side of him, so he had one paw over the crook of each elbow, and was feeling the energy between my hands and arms. In the moments of these intensely special connections, it feels as though I merge with the animal, and I will often feel tears welling up. I try to let that feeling just pass through and focus on continuing to send positive energy coming back to the animal.

After both these sessions, I felt such a profound sense of peace and calm in Abby, and it felt as though there was a bubble of calm around him as well. Best wishes to you Abby, look forward to seeing you soon. And thank you as always to BARC shelter for taking care of all these beautiful animals.

Posted by sarahsuricat at 10:16 AM