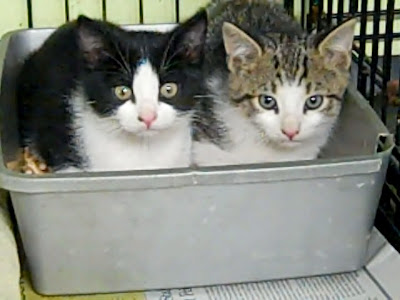 A few days ago I began working with two feral kittens at BARC shelter (since these pix, two more have been trapped), and this blog post discusses my first session with them. The picture above is actually after I had worked with them for a while, but you can see the black and white one still has the wide-eyed scared look. It's interesting, because the one on the right is actually more shy in its behavior.

When I opened the cage, they both hissed at me. When kittens or cats are terrified initially, I begin working with them either by doing Reiki from a short distance away, or by doing TTouch using a tool, such as a long-handled paintbrush. I began my work with them using a "fan" style paintbrush, which they were very receptive to. Sometimes I need to try a variety of tools before finding the one that really works, but this seemed to do the trick. I did little circular TTouches and strokes on the top of their heads, the outside of their mouth area, and then gradually started working some circular TTouches and strokes going down their body.

I just did a very little bit at a time, alternating between one kitten and another. When one kitten starts to get comfortable, usually the other does as well. After a few minutes, I was able to work my hand down the handle of the brush and began doing TTouches on the kittens with my hand, again, starting around the head area, top of head, ears, outside of mouth, then working down the body. I often used the back surfaces of my hand and fingers to do the ttouches, which is why you see my hand in a curved position below. 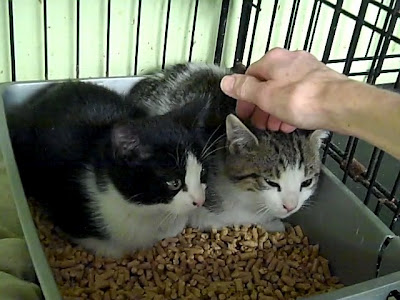 You can see the black and white kitten watching as I'm TTouching the other kitten, and the tabby and white kitten being a bit hesitant, but after a bit they settled into it. Again, I was doing a few TTouches on one kitten, then switching to the other, back and forth. At various points in the session, I would hold my hand still and just let the Reiki energy (which was constantly flowing) to flow over them. 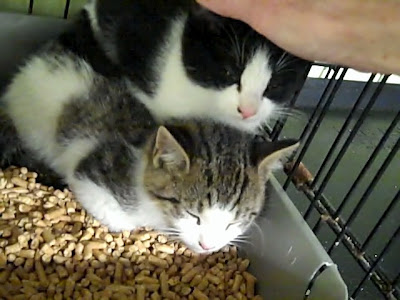 I gave them a bit of a break, closing the cage, and when I opened the cage again, they were one on top of the other as you see here. 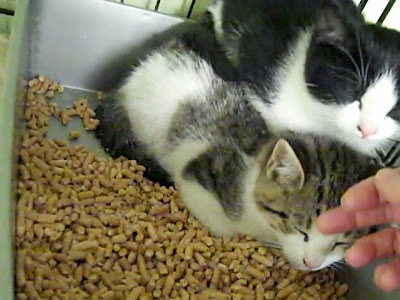 Again, I did some circular TTouches, mostly on their head areas, using the backs of my fingers. Around the forehead is a great area to work, and the ear strokes and TTouches around the outside of the mouth were also quite calming. The ears have many acupressure points, which have to do with respiration, digestion, etc, and the mouth area connects with the limbic system, which governs the emotions, so working these areas can help to really bring the stress level of an animal down. 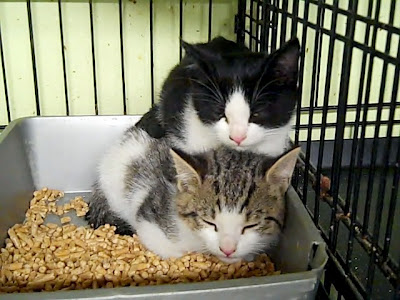 By the time I had finished working with them, they were quite cozy, cuddled as you see here. See you soon, little ones!
Posted by sarahsuricat at 10:43 AM