Jinx and the TTouch Body Wrap 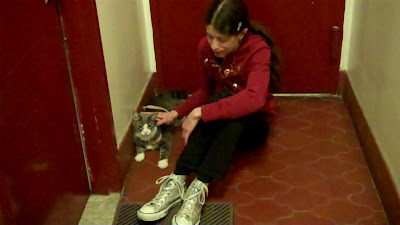 I have been working with my friend Jordyn Thiessen's (http://dancingminddesign.com/) cat Jinx, as he has been losing mobility in his hind legs, either due to a disk problem or a tumor. TTouch and Reiki have been helping him to feel more comfortable and bring some more connection, but last week I decided to try a wrap with him.
I am never sure how a cat will react to having a wrap put on them. For many cats, especially the cats who I work with in the shelters, who are often fearful, the stress of putting the wrap on is just too much for them, even when done gradually. However, some cats are completely accepting of the wrap and for them, the experience can be profound. 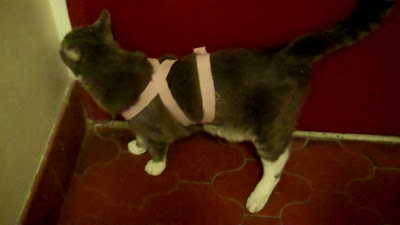 Jinx was completely fine with me putting the half wrap on him. I used a two-inch ace bandage cut in half so it was really a one-inch bandage. What was interesting was that immediately he began to walk and it was obvious that he felt much more connection to his hind feet and legs. Lately, his legs are generally quite wobbly, and can buckle altogether or sometimes his feet will flip over so he is dragging the front part of his feet.


We went into the hall with him, where he likes to walk, and I connected another wrap to the half-wrap so that he now had a full wrap on, which you will see in one of the videos. He is doing quite well, using his feet more completely and using his legs in a more integrated way. At the end of the first clip, he gets a bit tired and loses balance again, but altogether this is a big improvement for him. 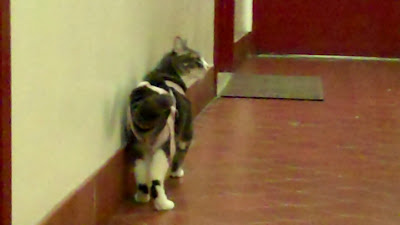 Then we took off the wrap, and immediately his hind legs buckled again. However, once Jordyn put him into standing position, he started to use his legs more fully again, though could retain the balance for just a short time.


Then we put a half-wrap on him again, and again he was walking in a more integrated and full way. And when we took it off the second time, he seemed to retain the feeling of balance a bit longer than he had the previous time.
Our hope is that with some time and practice, his body will start to remember the feeling of connection without the wrap, or, at least, he will be able to be as balanced as is possible for him, given whatever his medical condition may be.
I have a demo of the half-wrap on my youtube channel http://youtube.com/sarahsuricat, and will try to get a demo of the full wrap up soon. There are different ways to do it, but for Jinx, I just added onto the half-wrap by looping another wrap through the back part of the half-wrap, then looping it around the hind legs.


At the end, I did some Reiki with Jinx to help him wind down again. Thanks Jinx! look forward to seeing you soon. xo

Posted by sarahsuricat at 3:15 PM