Taking it Slooow and Easy With a Shy Cat: TTouch, Reiki and Cat Sitting with Krishna: Day 2 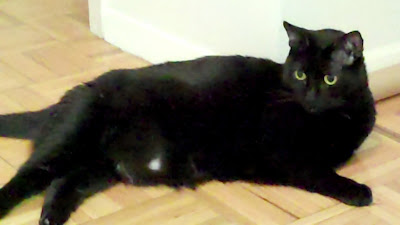 Today when I arrived to feed and work with Krishna, he was sitting in his usual place on the couch. He got off the couch right away and started walking towards me. When working with him, I always start sending Reiki to him before I get to the apartment, and continue when I am entering the apartment. It is especially important to do this with him, as when it's someone other than his people entering the space, he can be very frightened and sometimes pounce. The Reiki energy seems to lessen his concern, and he has not pounced on my feet yet.
After giving him his food and water, we settled down for a little play, TTouch, and Reiki. First of all I engaged him in a bit of play to get out some of his pent-up energy. He loves to chase the light from a flashlight. This is a great toy to use with him, especially for someone other than his people, as you can do this and be quite far away if necessary. However, I actually was in quite close proximity to him most of the time I was there today. Quite often today when I would give him a break and stop playing or doing TTouch etc, he came closer to me all on his own, to sit closer to me or sniff me or, in once case, he actually pawed my sweater a bit as though to get me to continue. 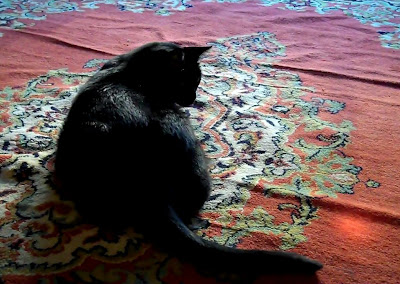 After chasing around the light for a while, I gave him a short break and did a bit of TTouch with him using a paintbrush. As he can become easily overstimulated, I would just do a few TTouches and then stop, then start again. Though his tail was twitching, indicating he was rather ramped up, it seemed more in a playful mode rather than a terrified mode. He was rolling around and doing little somersaults, which seem to be part of his play mode. Another thing he did occasionally was let out a little "brrrring" or chirping type of sound, which felt like he was telling me he was ready to play. 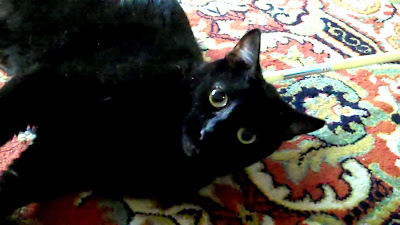 I also did some TTouches using a thin dowel with a bit of ACE bandage wrapped around the end, but as he can sometimes want to pull the ACE bandage off, I went back to using the paintbrush. I continued to give him breaks and during the breaks I would also be sending Reiki to him to continue the flow of calm energy. 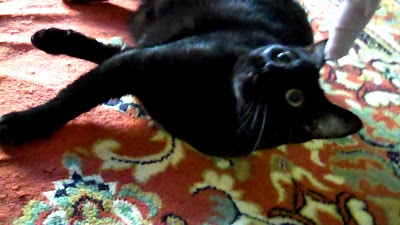 I could tell that he was still somewhat wary of me but curious at the same time. I'm sure that he misses his people too, which affects his mood. When cat sitting, I always make sure to tell the cat how many times it will get dark before their people return, and reassure them that the people are going to return.
So, back to the events today During the breaks as I sent him Reiki, he would often come up to me to sniff me a bit. I stayed very still while he sniffed me, so as not to startle him. One of the places he likes to go to, where it looks like he feels safe, is underneath a chair. I did a few TTouches on him with the paintbrush while he was under the chair, then gave him a break again, and he came back out from underneath the chair. When working with the paintbrush, I do circular TTouches and straight strokes on him, sometimes rolling the paintbrush on its side, improvising to see what the cat responds to the most. Today I was just working on Krishna's head area, as it seemed it would be too much to work on his body today. 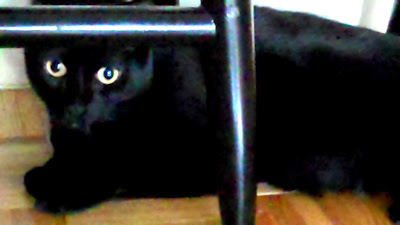 After giving him a break and taking care of his litter box, I sat on the floor again with him. This time I made a conscious effort to slow the TTouches down a substantial amount as I did them on his forehead, and it really made a difference. This time he really settled into the TTouches for a while. I saw his body relax, and his eyes close. After we were done, I looked at him and he blinked at me, always a wonderful sign!
Rebecca texted me when they got back, saying that Krishna was doing great, which is always so lovely to hear.
Love ya Krishna, hope to see you soon! 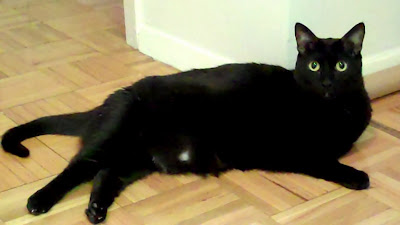 Posted by sarahsuricat at 11:43 AM