Reiki and TTouch with Bonsai and Nilo: Nov. 12 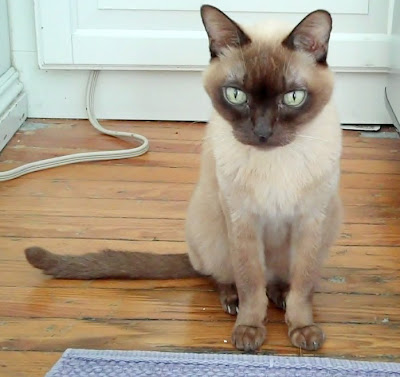 A few days ago, I went to do Reiki and TTouch with Bonsai and Nilo, who I have worked with off and on over the past year or more. Bonsai (above) is a sweet senior Burmese kitty, and Nilo is a very independent, lovely bengal cat (below). Nilo is extremely close with his human "mom", but is generally afraid of everyone else. He initially would run away from me, but we have established a closer and closer connection as time has gone on. Kristin's daughter has been able to have a bit more of a connection with Nilo as well. Bonsai tends to have seizures, which are being controlled with medication, and has been getting more frail as time has gone on. Kristin called me primarily because Bonsai had been seeming to be more frail and lethargic lately, so I spent a bit of time with Nilo, then concentrated most of my time with Bonsai.
Nilo is generally most receptive to TTouch in short spurts, as he is very sensitive and can get easily overwhelmed. 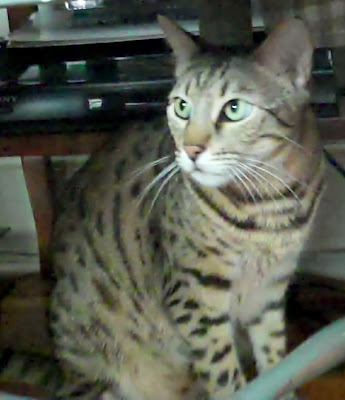 First I did some abalone TTouches with Nilo, working down each side of his back slowly. The abalone TTouches are circular TTouches done with the whole hand. The larger surface of the hand can be comforting to many cats who are unsure of people other than their guardians. I also did some slow zigzag TTouches from the front part of his body to the back, which are helpful in bringing an animal who is a bit scared back into its body. He actually didn't seem scared with me today, he settled into the TTouches pretty well, then decided he was done and walked away.So I then focused my attention on little Bonsai. 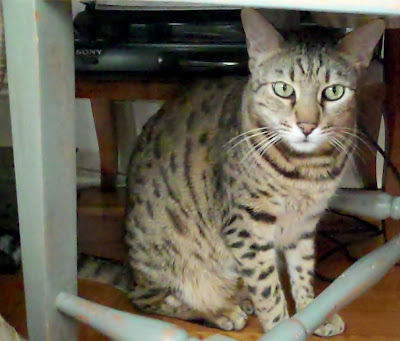 With Bonsai, I did a little bit of Reiki with him with my hands slightly off his body, then he got up to eat some treats. Reiki can sometimes stimulate the appetite! While he was in the kitchen, I did some TTouches with him which he was very receptive to, nuzzling sweetly against my hand.
When he was done with this, I thought a nice warm place would be cozy for him so I put him in a sunny patch on the couch and he settled in, curling up for a Reiki nap as I worked with him. I started out by having one hand resting over the solar plexus chakra (about midway down the back) and one hand off. As he is a delicate being, I often just have one hand on his body at a time, so as not to overwhelm him with too much energy.
He settled into this position for a while, then rearranged himself til one hand was on his head and the other was over his base chakra, on the very lower part of the back. Animals will show you where they want the energy to go. I stayed there for a LONG time as he took a reiki nap, I felt him totally taking the energy in. As the heat in these areas began to dissipate, I followed the heat on his body which seemed to work down the back from the heart chakra, to the solar plexus chakra, sacral chakra, and the base chakra again. I felt a lot of heat coming out, but it would start to dissipate as I continued to hold my hand or hands over these areas. I felt him to be sooooooo peaceful. He stretched out on his side and I continued with hands-on reiki near the solar plexus and heart chakras again, following my intuition and his body language as to where my hands should be.
Kristin came in the room to speak to me and as we spoke, I continued to send the energy to Bonsai as he continued to be laid stretched out on his side. When I left, I felt so much calm in Bonsai and a calm energy surrounding him. 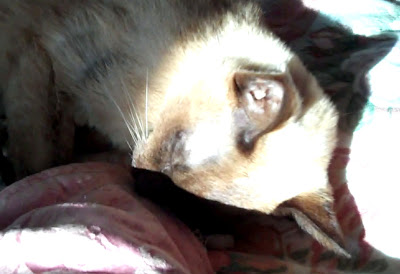 Later that night, I received an email from Kristin saying that Bonsai seemed to be much better after our session, that his energy had picked up, and he just seemed to be feeling better. This is always so wonderful to hear, it means the world to me. A few days after the session, I stopped by their apartment to deliver Bach flower remedies for the cats, and indeed, Bonsai looked much more alert, present, and energetic. Thanks so much to you all, sending all the best ..... xo
Posted by sarahsuricat at 9:41 AM