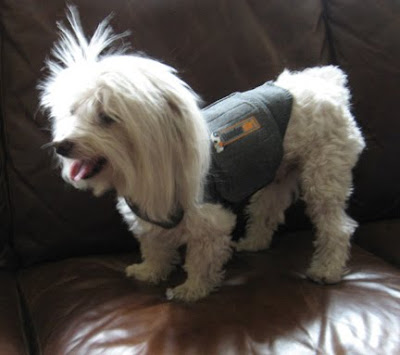 Mr. Prince is a sweet little Maltese dog who I met, along with his human mom, Mary, when I did a TTouch demonstration for a Maltese meetup group. He is a dear little soul, and gets along great with Mary and with his dog sisters, but he is a very nervous little guy in general. A couple of the ways the nervousness manifests itself is in barking and urinating in the house. He was a rescue and previously wasn't taken out for walks, so he also had gotten used to peeing in the house. When I worked with him at the Maltese meetup, Mary could see that the TTouches were extremely calming for Mr. Prince. He is usually a bit wary with a stranger, yet he was leaning into me as I did TTouches with him. So it was wonderful to hear from Mary's friend Leslie, who wanted to give a gift of a TTouch session to Mary and Mr. Prince. Leslie was also present at the sesson, and it was great to have questions and feedback from both Mary and Leslie as the session progressed. When I arrived at Mary's place, I got such friendly greetings from the whole gang. It was clear that Mr. Prince was quite hyper, though, and was easily triggered to start barking. First of all, I put a TTouch half-wrap on him, which is done using an ace bandage (see link for demo: http://www.youtube.com/sarahsuricat#p/u/23/N83oXBZy0KM) This started to bring down his stress level right away. With the wrap on, I began to demonstrate some of the various TTouches so that Mary will be able to do them on Mr. Prince. Connected abalone TTouches going down each side of his body were especially soothing to him. I could feel the tension in his body melting away and the expression on his face relaxing. As we went along, we kept noticing how much calmer Mr. Prince's energy was. Leslie commented that his expression on his face was as though he almost wasn't sure what to do now that he actually was calm. It seemed to be an unfamiliar state to him. I also demonstrated how to do the beginnings of a face wrap. This wrap is especially good for dogs who tend to bark a lot, as it reminds them of the mouth area, and can help them to relax there, and to feel less like barking. A complete face wrap seemed to be too overwhelming for Mr. Prince, so I simply folded the wrap and draped it a bit over his snout, then later tried draping it over his head. I just left it there for a matter of a minute or so, then took it off. Just these simple actions appeared to give him some awareness in this area. I also showed her how to do TTouches around the mouth area, while we were on that subject. Following that, I showed her more of the TTouches, strokes and lifts. I had also brought a Thundershirt, but to my surprise, it was actually a bit too small for Mr. Prince. But we were able to see how effective it would be for him by just draping it around him. I told Mary I would bring her the next size up for him. Then I had Mary show me a few TTouches to make sure that she was clear on how to do them, and showed her the wrap again. By this time, Mr. Prince's stress level had dropped SO substantially since I had entered the apartment. It really was a dramatic shift. I felt like the atmosphere of the whole apartment felt quieter and more calm. I left Mary with a Bach Flower remedy to give Mr. Prince which would be helpful for his issues in addition to the TTouch. We met another time so that I could show her how to put on the Thundershirt. The design of these shirts is wonderful. It is a very fitted shirt, and is made so that you don't have to put it over the head or put legs through. They are meant to be put on so that they hug the body, but are not tight. It wraps around the body, using velcro to secure it in several places. Again, we saw such a dramatic shift with Mr. Prince once the Thundershirt was on him, and felt his energy to be more focused and at peace. He had been running around barking just monents ago, and suddenly he just became very calm and laid down on the couch. I also did some TTouches on him with the Thundershirt on, and I had him get up from the couch a couple of times to walk around, to make sure he didn't feel "frozen", as sometimes the Thundershirts or wraps cause such an unfamiliar feeling that the dog will freeze and seem to feel he can't move. As with the wraps, the purpose of the Thundershirt is to bring the animal back into its body, and to give it a new sensation. For that reason, they are not meant to be left on all the time, just put on for periods of time to remind the dog that his energy can be calm and focused. The wraps are never to be left on an animal unsupervised, as the animal can become tangled up in it if he tries to take it off. Above and below are photos of Mr. Prince in his Thundershirt. He is quite a photogenic little guy! Thank you so much one and all. Mr. Prince did a great job, and Mary is continuing to make wonderful progress with him as she continues with the TTouch work with him. 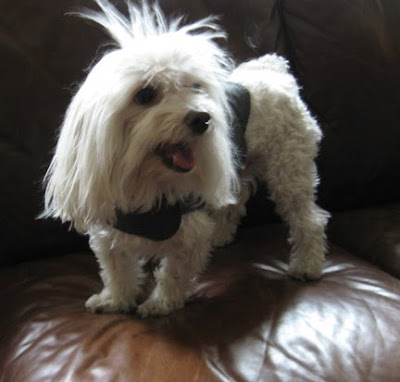 Posted by sarahsuricat at 1:28 PM