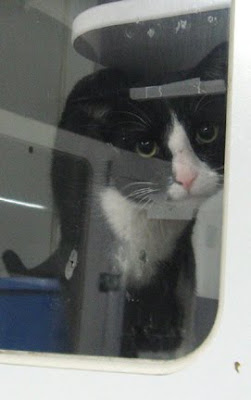 I had a lovely time, as usual, with the Mayor's Alliance rescue cats who I work with thru Tavi & Friends' TTouch-in-Rescue program.
Spock (above) is such a sweet, friendly guy. He came out of his cage and settled on my lap while I sat on the couch and did TTouch with him. I did little raccoon TTouches on his head, connected chimp TTouches on his body, and did ear strokes and mouth work with him as well. 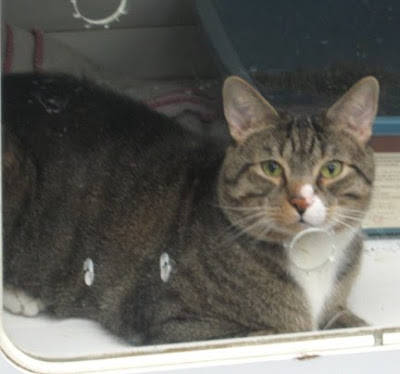 Pedro is quite a character. He was very excited to have attention when he got out of his cage and came right up in my face to give a kiss. I did some slower abalone TTouches with him, as he can get over-stimulated. Abalone TTouches are circular touches using the whole hand, so they have a more relaxing, calming effect, which some of the TTouches uisng less of a surface of the hand and fingers are more focused. Another touch that worked really well to calm him was doing an abalone TTouch followed by a long, slow stroke down his body. 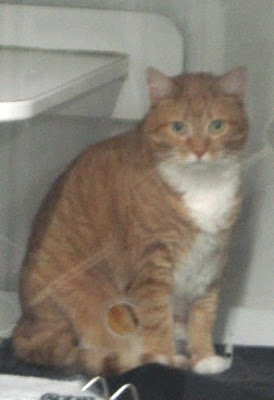 Nene is a sweet cat and loves people but can get a bit intimidated by other cats. I do generally take these cats out of their cages one by one to work with them, but you can tell by his interaction with the cats that are still in their cages that he is a bit of a shy boy when it comes to the other cats. Today, as he seemed to be a bit keyed up, I did gentle, slow raccoon TTouches (using the tips of the fingers) on his forehead. The forehead can be a wonderful area to work to calm a nervous cat. 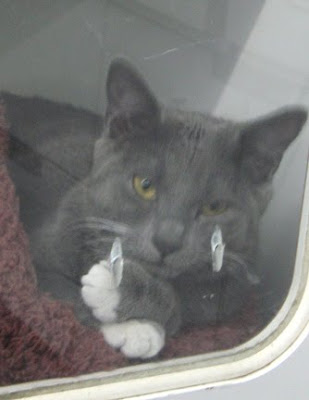 Munchie is a young little guy who often wants to play instead of being touched. He is still a little hesitant to be touched directly with a hand, so I started out using the back scratcher and the paintbrush to do little circles and strokes on his head and body. He became very relaxed with this, and playful as well, sometimes playing with the tool, other times relaxing into the touch. 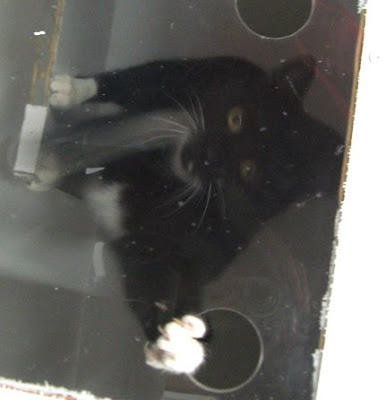 Maddie is just too cute. She gets so excited for contact that she drools. I sat on the couch and at first she was walking back and forth across my lap, as I did some circles and strokes on her. Then I began to do some hair slides, which are a bit hard to describe, but you hold on (not hard) to a bit of fur and stroke it out to the tip of the fur, a bit like combing the fur with your hands (fingers kept together). I found that these were particularly calming for Maddie, and she settled as I did these going down her body. 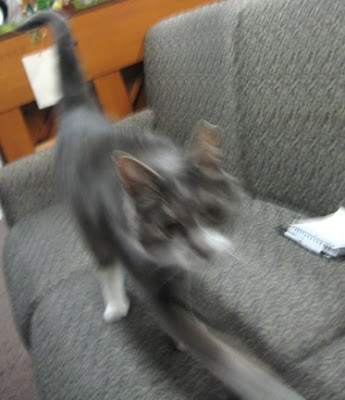 Mack is a sweet little guy. When you first open his cage, sometimes he can seem a bit shy but once I bring him out onto the couch, he is extremely affectionate. I did chimp TTouches going down his back, and ear strokes are very calming to him. He was rubbing against my hand as I did this with him. 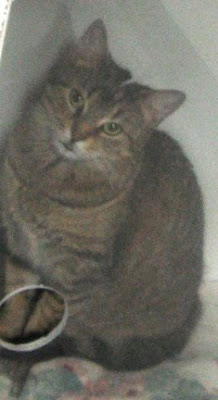 Honey can still get a little over-stimulated and swat or meow, she still seems a bit nervous. She warmed up and got quite comfortable as I did TTouch with her. Because she is still shy, I alternated between TTouching her with the back scratcher and doing chimp and llama TTouches with her. Both the chimp and llama use back surfaces of the hand and fingers, which are less intense than using the front surfaces of the hand, so these are great TTouches to do when you are just starting to get an animal used to being TTouched. As always, you can see demos of many of these touches on my youtube site, http://youtube.com/sarahsuricat. Please feel free to visit the site, and email me with any questions you may have. 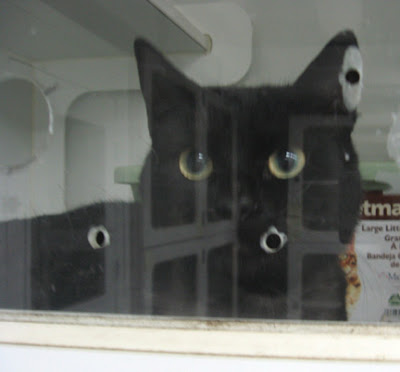 Marette is a sweet cat, but is still a bit unsure, so I am still very gradual in my approach with her as well. Today I found that she was especially receptive to being TTouched with a small (one inch) foam brush. I did little circular TTouches and strokes around her head, as well as strokes going down her body. 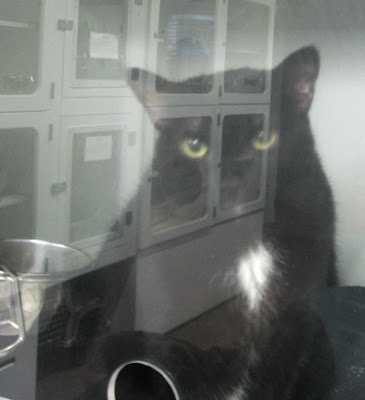 Blackie is generally eager for attention, but can get over-stimulated with too much touch, so I was extra-quiet and slow in my approach with her. I did small circular TTouches and hair slides around her head, and a few hair slides around the top of her chest area. I also discovered that she is quite sensitive around her hind-quarters. I tried using a jelly scrubber (actually a horse-grooming tool) to do some gentle circles and strokes around the lower half of her body. Initially, she was resistant to this, but then I eased up with the pressure I was using and she settled into it. 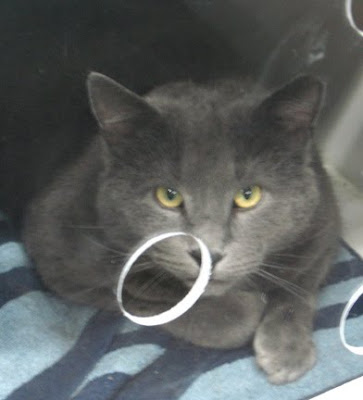 Buddy is such a gentle soul. He is FIV positive, so will have to be adopted either as a solo cat or into a household with other FIV-positive cats. I don't know if it's just coincidence, but it seems that all the FIV positive cats who I have met seem to be the most gentle, sweet cats. I did gentle hair slides on his head, and abalone TTouches on his body, and he really spread out and let go, which was such a pleasure to see.
Thanks to all of you sweet cats, I'll see you soon, unless you get adopted :)

Posted by sarahsuricat at 12:21 PM