TTouch and Reiki at BARC: Update on Dr. Teeth 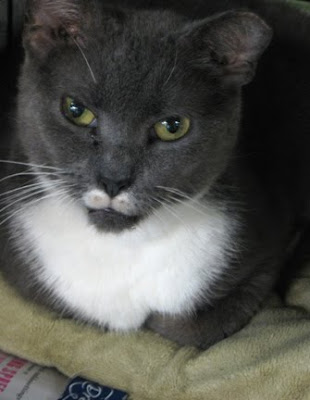 Dr. Teeth is an extremely shy cat who has been at BARC shelter for some time, and I have been working with her very gradually. She gets to little plateaus, then after a while breaks through to another level. This is all with baby steps, but all those steps add up!

Lately she has started to come to the front of her cage to greet me. I have found that she is still startled to have a hand reach towards her initially, so I start out doing little circles and strokes on her back using a paintbrush. I don't stick the paintbrush directly at her, I sit sideways to the cage and put the brush in at an angle to her. After she is comfortable, then I can transition to doing TTouches on her directly with my hands.

Last Saturday, I showed some of the volunteers how to use some of the TTouch tools, like back scratchers and paintbrushes, and so Dr. Teeth was touched by a bunch of different people, most of whom had been scared to try to touch her before, as she will generally hiss at an unfamiliar person if they stick their hand right in the cage toward her. But she became quite comfortable with all these different people, as they were using a gentler approach, and weren't trying to touch her directly with their hands. She is generally more comfortable being touched on her body than her head, but has been starting to be comfortable with a few touches around her forehead, ears and back of her neck.

Then Tuesday, when I went to see her, again I started with the paintbrush. When I started doing TTouches on her using my hand, first I started on her body, as usual, then transitioned to doing some TTouches around her head. Then I started to try some little TTouches around her cheek and whisker area, which is an area she is generally not comfortable (unlike many cats). But this time she actually started to respond to my touch, rubbing her face a bit against my hand. This was really a breakthrough for her, and it was so dear to see her relax enough to really enjoy and respond. If you look at her face in the photo in this post and then compare it to some of the past posts, you can see a more gentle, relaxed expression. And what is so sweet is that as you work with a fearful cat like her, the more she relaxes, the closer you can get to her and the more you feel her true personality emerging.

I look forward to seeing her soon, and to sharing more about TTouch with the wonderful volunteers at BARC.
Posted by sarahsuricat at 6:50 PM