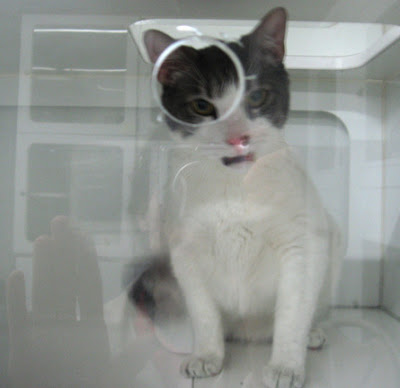 It is always a pleasure to go to work on the Mayor's Alliance rescue cats. Today was especially exciting because Lee (above) is getting so much more comfortable and confident in such a short time!

Lee hissed today when I first opened his cage, so I started out with him doing TTouches with a paintbrush. He quickly became VERY comfortable, coming out of his cage into the room, purring and rubbing against me as I did chimp, abalone, and clouded leopard Ttouches on him. I also did very gentle hair slides on his head and body. He came up on the couch with me briefly for TTouch, though he seemed to prefer if I sat on the floor with him and waited for him to come up to me to do TTouch for a bit, then he would walk away for a break, then come back again. He has come such a long way in such a short time! He is so filled with love, and the more he comes out of his shell, he seems to be just so eager to share it :) 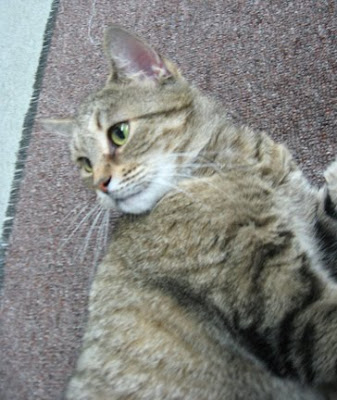 Honey is a lot more comfortable now, though she is still somewhat on alert, and can get startled at times. So the best strategy with her is to open her cage, wait and let her come to me for TTouch, instead of reaching out to her. With her, I do just a little bit of TTouch, give her a break, let her walk away if she needs to, then when she comes back, try again. Hair slides, raccoon Ttouches on her forehead, and clouded leopard TTouches going down the side of her body are what she responds to most. 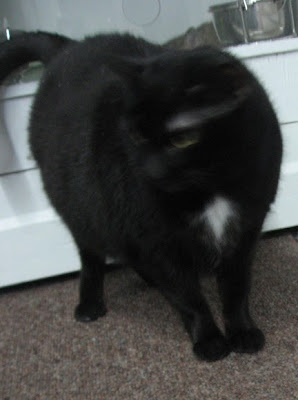 Blackie is an extremely sweet cat but can get over-stimulated with too much TTouch done directly with your hand, so I used the jelly scrubber with her. The jelly scrubber is a horse-grooming tool but it works very well for doing TTouch as well. You can do the circular TTouches with them, as well as plain strokes. This can be a nice way to introduce a cat to the idea of being brushed, as it is very gentle. Blackie really settled with the jelly scrubber TTouches today – I did a circle, a long stroke down the body, paused, then did it again, etc. 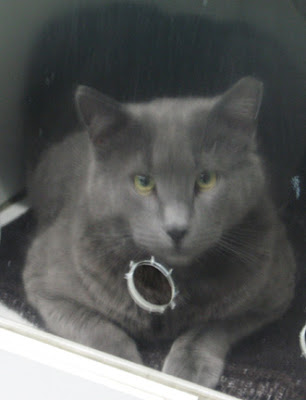 Buddy, who is FIV positive, is extremely gentle and sweet, he's like a fuzzy teddy bear. I discovered today that he can be very playful as well! He particularly responds to hair slides and raccoon TTouches. 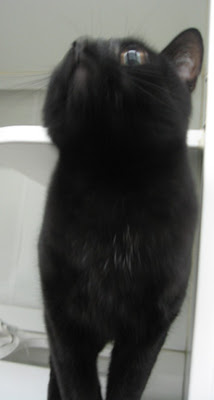 Blackie 2 (above) and Kitty (below), who started out being a bit shy, have gotten so much more comfortable. Both of them came up to me and rubbed against my hand. Kitty put her pays up on my chest and came out onto my lap. I did clouded leopard TTouches and raccoon TTouches on her head, as well as some ear strokes, done very slowly, and she settled right into my arms.
Blackie 2 didn’t come out of his cage yet but he was completely at ease with me, totally settling while I did connected clouded leopard TTouches going down his body, as well as earstrokes. 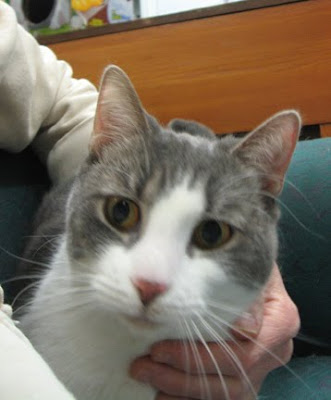 Next I worked with Hank, who looks a bit like Kitty! 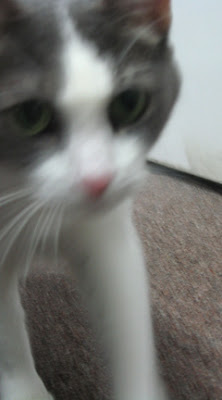 Hank (above) is very sweet, and is very responsive to any of the TTouches, with him, the more, the better. He is very humorous as well. Today he was doing somersaults in his cage, trying to get my attention! 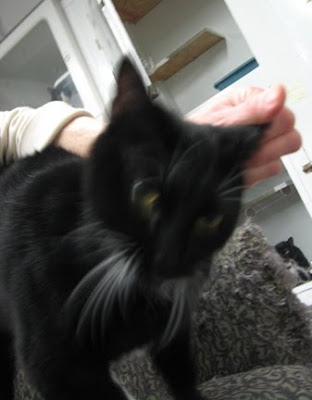 Maddie is a character, she is so friendly and so excited to come out of her cage for attention that she drools, dripping as she walks along, purring. Hair slides and ear strokes were particularly calming for her, enabling her to settle a bit with me. I also did what is called a “coiled python”, meaning you do a circle, followed by a stroke. 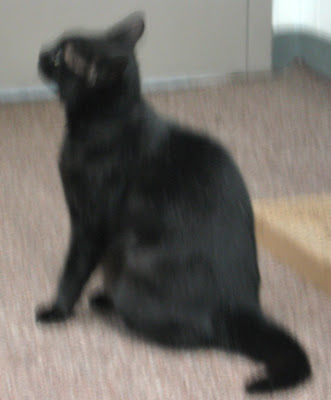 Marette is very sweet and seeks attention, but she is still a bit afraid of it. So with her, I did TTouches using the back scratcher, which is less threatening than using the hand directly, and she was comfortable with this. Sorry about the blurry picture, she is still a bit skittish so is often on the move! 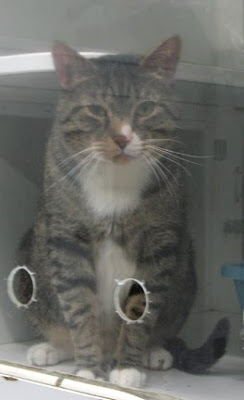 Pedro is also super-friendly and can be a bit overwhelming with his energy. Today, however, I decided to start out with Reiki instead of TTouch. I focused primarily on his heart and solar plexus chakras. This was so calming to him that he completely settled on my lap as though I was at home with him. Great to see this guy, who can get a bit worked up, completely let go. 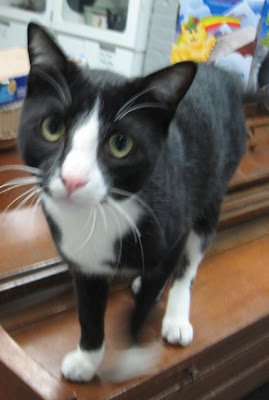 Spock came right out of his cage and settled right on my lap, purring. He really settled there as I did slow abalone TTouches on him, as well as ear strokes. Ear strokes can be so important for calming cats, as there are many acupressure points in the ear.

Thanks, guys and gals! look forward to seeing you soon unless you are fostered or adopted, which would be great! xo
Posted by sarahsuricat at 6:24 PM