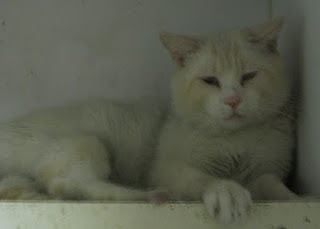 Myron is one of the most challenging cats I have worked with at the shelter. He is SO frightened and sensitive, sometimes he will hiss and swat if anyone even comes near his cage, much less open the door and try to touch him. If I get to the shelter early enough, I offer to change his cage so that I can do it extremely quietly so as to put the least amount of stress on him possible. I have also been adding rescue remedy to his water.

Occasionally, one other volunteer and I have been able to touch him just on his head, but most of the time even that is not possible, he generally lets out a huge hiss and swat that lets you know he really means it, LEAVE HIM ALONE.

The past couple of weeks, I have been standing outside his cage, offering Reiki to him. He is so sensitive, I can see him respond to the Reiki energy quite rapidly, and he becomes more relaxed, often closing his eyes and taking a nap. 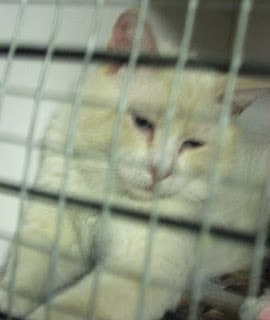 More and more often now, we will see him at the front of his cage rather than at the back of his cage. He still seems like he is afraid of being touched, but he is getting closer.

Yesterday while I was sending him Reiki he was lying on his back, legs in the air and head against the cage door. It was lovely to see him in such a relaxed position.

I know that I need to continue to be very patient with him, and that he will be ok to be touched in his own time. Meanwhile, I am very happy to send Reiki in order to help him become more and more relaxed. What is interesting, too, is that lately his coat looks cleaner and healthier, and his eyes seem more clear. This has happened with our kitty Jerry as well, who was terrified and shaking when he first came into the shelter and he has really been coming around.

Here's to you, Myron, I'll be ready to TTouch you when you're ready :)
Posted by sarahsuricat at 12:47 PM