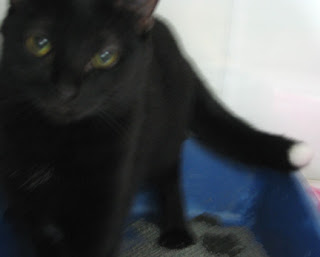 The other day I went again to do TTouch on cats through Tavi and Friends, through their TTouch-in-Rescue program to provide TTouch to one of TaF's Partner groups, the Mayor's Aloliance for NYC's Animals. These cats are temporarily at a boarding facility until they can be sent to various rescue groups or sent out to an adoption event, etc.

On this day people were in the midst of cleaning cages, so the animals who are generally scared were a bit more so but I did have still some lovely results with a number of cats.

Samantha (above) is very curious and LOVES attention, she now comes right to the front of the cage and begins to rub herself against it until I can open the cage and give her some attention. She began rubbing her body against my hand while walking back and forth. She responds well to all types of touches, around her head, mouth, back, etc. She just seemed like she couldn't get enough! I came back to her a couple of times, as she kept watching me and waiting for me to come back to her. 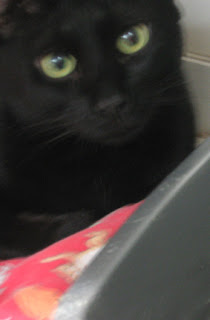 Marty (above) is still rather reserved and though he came to the front initially, when I opened his cage he seemed reticent to have me touch him. I tried touching him with a feather and was able to do some bief touches on him, as well as a few brief touches on him with my hand.
I did this in a couple of short sessions with him. 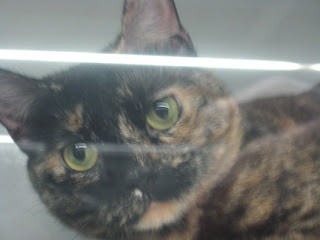 Isabel (above) is increasingly inquisitive and still prefers to have direct contact through the holes of the plexi on the front of the cage, I was able to do some touches on her face and her body this way. She seems to seek further contact but is just not quite ready for it yet, as she runs away still when you open the door to her cage. But her sweet eyes really connected with me and made me feel she is getting closer! 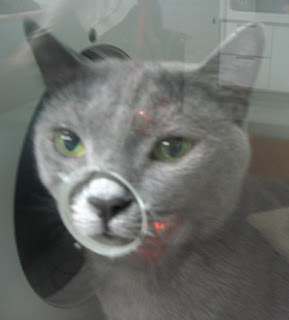 Porter (above) is such a love, now he comes right to the front and talks to me until I open his cage and do TTouch on him. He is now comfortable with touches all over his body and head, though occasionally he will need a break as he can get very stimulated by TTouch. He really longs for interaction and responds to it, it seems like every time I see him more and more of his personality comes out. Though of course this is a gross generalization, I have often seen with Russian blue cats a very playful, intelligent spirit and a longing for real engagement and interaction. They can also be quite vocal when they want to be!

Zorro (below) was his same handsome, friendly self - he rubbed his face and body against my hand and was ready to have as much contact as I wanted to give him. 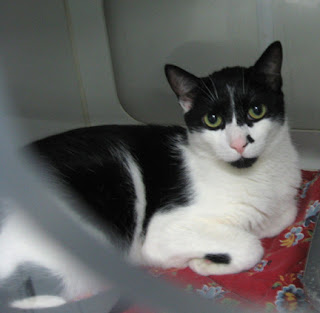 Posted by sarahsuricat at 3:01 PM