It's kitten season and I'm having the opportunity to work with many kittens at Social Tees shelter. Many of the kittens arrive quite frightened, at least initially, and I'm finding that for the most part, even kittens that are pretty feral can be brought around fairly quickly with TTouch, especially the ones that are very young. So many of these little ones start out pretty squirmy when I first pick them up, but after a few sessions of TTouch they learn that I am going to touch them in a gentle way and they settle right down in my lap. 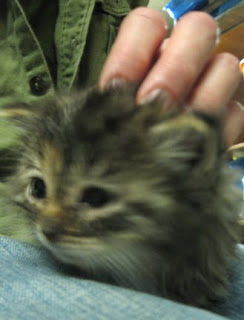 This little fluffball above was pretty unsure at first, you can see that her face looks a bit worried. I tend to use a lot of the smaller touches, such as raccoon touches and chimp touches, as kittens are so small, but sometimes I will use some abalone touches (circular touches using the entire hand) as they can be quite warm and comforting. 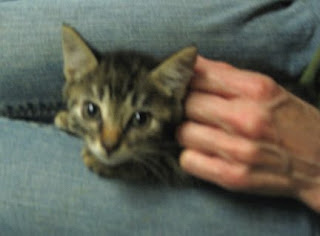 Little raccoon touches around the outside of the mouth and jaw can also be quite soothing. I know that the little fellow below looks un-soothed and wide-eyed, but I think he was startled by the camera :)

Another thing that I do sometimes, especially with a squirmy kitten, is to wrap the kitten up in a small cloth like a washcloth. I can do touches through the cloth and once they feel comfortable then I can loosen the cloth and do touches directly. The cloth serves as a containing device so that they don't get loose in the shelter and also as a comforting, soft feeling thing similar to a wrap (ace bandage), which we use (mostly on dogs) in a variety of configurations.

hoping for these many cutes ones to be in new homes soon! 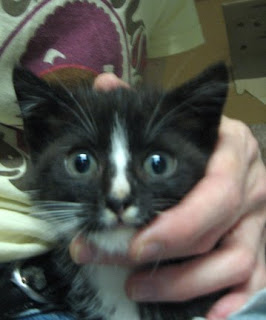 Posted by sarahsuricat at 10:45 AM