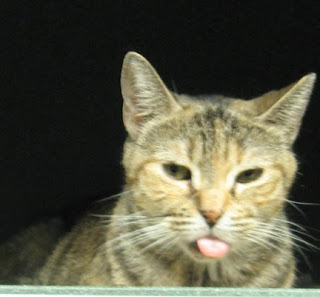 I'd like to pay special tribute to two sweet kitties who recently crossed over into the spirit world: Grandma (pictured above) and Alfalfa (see photos below).
Grandma was a feral cat who had been at Social Tees for many years and she was in her mid-20s. Her tongue hung out because she didn't have any teeth left, but that didn't keep her from appreciating wet food, that's for sure. There is a group of maybe ten "feral" cats who are loose in the shelter (I use quotes because some of them have become tame and are totally adoptable). We always get a laugh seeing their little faces appear at unexpected moments, sometimes way up high. They love to drape themselves over the warm pipes in the winter and rest there.
Grandma was spry right up until the end, and had a stroke or attack of some kind when she was actually on a beam up high in the shelter where the loose cats often love to hang out. Her "husband" Grandpa passed on a while back, he was also quite old and went peacefully in his sleep. Though Grandma was mostly afraid to let people touch her, she brought a lot of sweetness and joy to the shelter, and I witnessed some very dear moments with her. One was when the shelter was very quiet, and she came right down into the middle of the floor to meet up with one of the other very senior loose cats who we call Leo, and she very tenderly started rubbing against him and cleaning him. Robert said he saw that a lot after-hours when the shelter is quiet. I can picture sweet Grandma leaping up, being her nimble self and reuniting with her husband Grandpa. Happy trails, Grandma, we will miss you as we miss Grandpa. 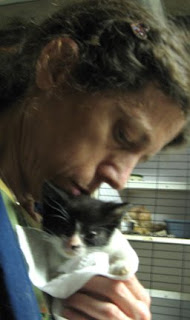 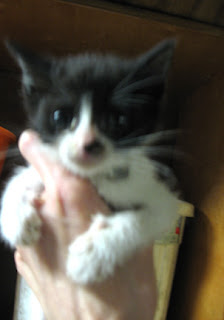 Alfalfa was on the other end of the age spectrum. He was the tiniest little fluffball of a kitten, about a third the size of the other kittens he arrived with. Several of that batch were very small and weak, and two passed away soon after we got them, with no apparent symptoms other than their smallness, but Alfalfa seemed to be a very determined little soul and we all were doing everything we could to keep his strength up. I did TTouch on him every day, and he especially responded to ear strokes, and he really settled into my hands as I worked on him. He really seemed content, his coat was good and his appetite was good, it seemed like he was going to be all right.
Unfortunately he passed away yesterday afternoon.
I was very saddened by this, as were the other shelter volunteers who had worked with him, especially my friend Jordyn, who comes to give the cats hydration and love and helps with a million other tasks around the shelter. Strangely enough, right before I went to the shelter I had a vision of him with light all around him, I think he was trying to tell me he had crossed over and that he was all right. He was a sweet angel -- he will be missed, and I will always remember him.
Posted by sarahsuricat at 9:50 AM