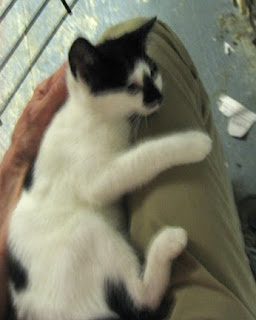 We currently have many kittens at Social Tees, so I am having the fun of doing TTouch on them. It is amazing how quickly some of these kittens can some around, especially as quite a few have not known human contact before.

The sweet kitty above I call Harley, as he looks like a little harlequin. The first day he came in with his two brothers he was quite scared, but as you can see, by the second day he was purring away comfortably on my lap. I started out doing TTouches around his head and ears and worked my way down gradually to doing TTouch on his body. I did this first with him in his cage and then picked him up and held him in my lap to do this.

Yesterday we put four kittens (two sets of two from two different cages and litters) in our window enclosure along with our sweet one-eyed cat Baby and our super-sized boy Big Al. I got into the enclosure to do TTouch on everyone to make them comfortable. I started out by doing TTouch on Baby (pictured here sitting in back of the 3 kittens), as she is the shyest. She knows me well as she has been in the shelter for a while and so she grew more at ease after I TTouched her for a while. The little kittens gathered in the cat bed, as you see here, and Big Al was on an upper shelf, unconcerned with it all. Baby began to touch noses with the little ones to see who was receptive. One of the kittens was not ready yet and gave a tiny hiss but no swatting or spitting, just a "give me a little more time to be comfortable". 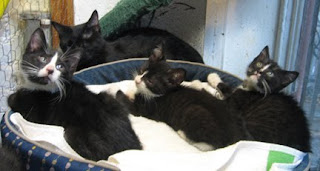 I began to alternate betweeen the two adults and the four little ones, doing TTouch on each, and felt a very calm atmosphere was there. The four kittens were cuddled in the bed and Baby was sitting where you see her in the picture. I had noticed that one of the kittens had very long claws so I decided to clip their claws. I was amazed at how relaxed they were with me doing this. They are so used to me TTouching them that I think they thought this was part of the TTouch. I pivoted the cat bed around to get each kitten in a good position for the claw-clipping. So, though I know this is obvious, the earlier you get these little ones used to the claw-clipping, the better! I used simple toenail clippers to do this. I find that giving medication (if we need to do this, we are generally giving liquid meds with a syringe in the mouth) is also easier on these little ones who are used to being TTouched, as I do it in a gentle way and sort of slip it in as part of the TTouch, doing a little TTouch, ear strokes etc and then put the syringe in the side of the mouth and squirt the medicine in (always make sure you don't squirt it in straight down to avoid choking them).

Getting the little ones used to being picked up, held in a lap, etc is also very good because, for one thing, these are the first things that potential adopters want to do with cats, so it is great to have them be comfortable with this.
Posted by sarahsuricat at 12:08 PM