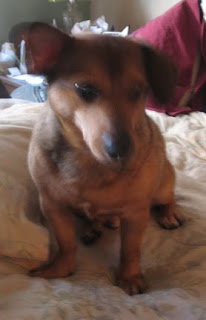 Recently this adorable dachshund mix arrived at our shelter, apparently with very little use of his back legs. The xray which had been done showed nothing broken, but a disk problem of some kind. My friend Jordyn Theissen (http://www.myspace.com/dancingminddesign) came to see the dog and they connected immediately, so she is now fostering him and doing an amazing job with him.

I went to see Jordyn and Buddy (and the rest of her gang, Petey, Noodles, Dura and Jinx, two dogs and two cats) a couple of days ago. Within four days, she has made amazing progress with Buddy. She walks him with a leash slung around the lower part of his body and a leash attached to a harness, which works very well. He also has little booties on his back feet to keep them from slipping too much. Buddy is still learning how to use us feet and sometimes they flop over on the top side of the foot, but he is learning fast.

I showed Jordyn how to do a variety of Ttouches on Buddy which will help him bring more awareness to the back half of his body and his feet: zigzag touches going all the way down the body and down the legs, connected abalone touches going down the body, python lifts on the legs, and raccoon touches all around the paws and pads of the paws. Buddy is an enthusiastic learner and responded to everything we did. We also put a half-wrap on him for about five minutes. I would like to try a full wrap but didn't want to overwhelm him with too much information in one session.

I demonstrated the TTouches not only on Buddy but did them on Jordyn's arm as well so she could feel the very light pressure which I was using. As we don't have many details about Buddy's condition, I did not want to use a heavy pressure with any of the touches.

I also had him simply stand on all four feet briefly (supporting his back end when he needed it) a couple of times and subtly adjusted his body and feet til he was more in balance.

Two nights later I spoke to Jordyn and she said Buddy was able to walk without the leash around his hind end. He's still learning how to do this but she said he is learning amazingly fast and is increasing in mobility by leaps and bounds. I look forward to working with them more, and congratulate Jordyn and Buddy on so much progress. I'm sure all the love she gives him doesn't hurt either :)
Posted by sarahsuricat at 1:36 PM