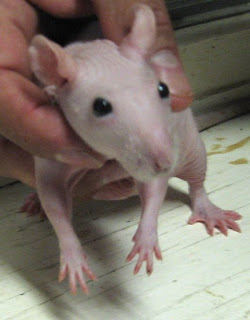 All kinds of interesting people and animals come into Social Tees shelter, and yesterday was no exception. A man named Gus came in with his hairless rat, Vanessa, who happily stayed on his shoulder as he walked around. One could see right away how connected they are with each other. (above and below, Gus holding Vanessa off his shoulder for a better look at her) 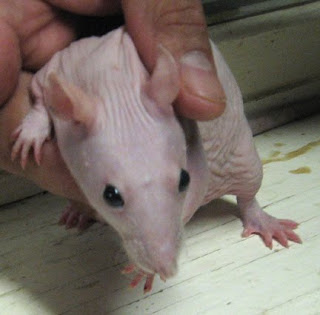 I had never seen or held one of these creatures before, and Gus was kind enough to let me hold her. When she was first in my hands, of course she was rather unsure of a new person. Her skin felt rather hot to the touch, was rather loose and was different than anything I've felt before.
I slowly began doing some little raccoon touches and clouded leopard touches down Vanessa's body, and felt her start to relax into my hands right away. I showed Gus what I was doing as well, in case he feels like trying it on her.
Many thanks to both Vanessa and Gus for allowing me this very new TTouch experience! It's always so interesting to try TTouch on a new animal.
Posted by sarahsuricat at 10:33 AM