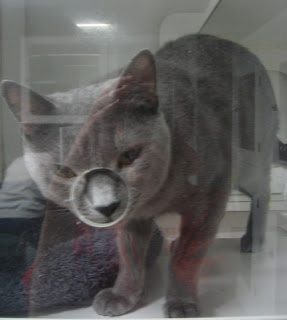 Yesterday I did TTouch on some cats through Tavi & Friends, through their TTouch-in-Rescue™ program to provide TTouch® to the animals of one of TaF's partner groups, the Mayor's Alliance for NYC's Animals. These cats are temporarily at a boarding facility until they can be sent to various rescue groups or sent out to an adoption event, etc. Some of them are quite friendly and others need a great deal of socialization. Mary Bruce, who runs Tavi & Friends, who does so much good work, introduced me to the facility and to the cats.
My friend Marge Piatak has been working on some of these cats, including a lovely Russian Blue kitty named Porter. Here is what she had done with him before I met him:
"I've been having an interesting experience at Mayor's Alliance - Porter - a cat who was marked CAUTION - Not Friendly! My first visit with him - he was so low in his bed you could only see the top of his head and 2 eyes - which were literally horizontal slits! He stayed that way the entire time I was in the room. Once or twice I stood to the side, toned & did some air circles.. Second visit - same initial position in the bed... I did more touches -- on the window with paintbrush -- strokes... toned.... I went back several times near front of cage..Then --- after working in front of the room, I walked to the back -- i didn't recognize him -- he was standing up in front of the cage following my movements. Did window touches w/ brush, my hands.. Then put brush through cut out circles - he bit it like crazy, but I got in circles....
Yesterday was a 3rd visit (these are 2 weeks apart).. In bed when I got there, but within a minute - to the front of hs cage. Can now touch his body and head with brush & stroke w/wand --- but he really likes to bite down hard on the brush or whatever --- I'm really happy though. His first posture looked more like --- Come one step closer & I kill!
Now he's allowing the interaction & I hope benefiting from the circles I can do with him." 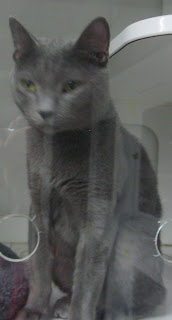 Marge has done such a great job with Porter, and I'm sure that all her work prepared him for the interaction I had with him yesterday. I started out with him doing some strokes with a plastic back scratcher, but he seemed to dislike this. So I changed over to a long feather. I was able to do some circles and strokes on his head, and a few strokes on other parts of his body, but he would also bite and play with the feather. I gave him many breaks, and each time I stopped, he came to the front of the cage to see what I would do next. 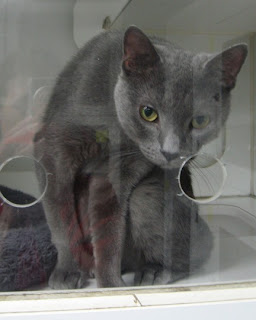 I decided to see what would happen if I really calmed and slowed my energy down, and if I felt an invisible connection from my fingers to him. He sat down and looked at me, blinking at me. I began to do clouded leopard circles in the air about a foot away from where he was lying down. I could tell he was familiar with the circles and I could feel him being calmed by them, as he settled into a more cozy position and his eyes got more sleepy. He in the back of his cage so it was hard to reach him, but I started to do some strokes and circles with the back of my fingers around his jaw and cheek area, and then his forehead, and felt him begin to push back with his head. I did some circular touches w/the back of my fingers on other parts of his head and neck area. Then he came to the front of the cage and down on the bottom level, right in front of me, where I was able to continue doing circular touches and strokes with the back of my hand down his back, as well as some ear work, and he was really responding, leaning into my hand. When he had enough, he went back to the top level, back of the cage for a bit, and when I closed his cage he came to the front again, watching me work on the cat next to him. I came back to him again after that, and when I started out with him he was a little shy, in the back of the cage again at first, but then was leaning into my hand again.
Big thanks to Marge, Mary and other volunteers who have worked w/Porter, I know all their patient work with him got him ready to be able to make complete contact. Porter is such an intelligent, engaging cat, that once he becomes more accustomed to being touched, his chances for being adopted soon will be very great.
Posted by sarahsuricat at 8:16 AM