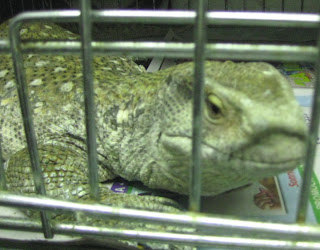 Social Tees Animal Rescue Shelter does reptile rehabilitation (the reptiles are not adopted out, they are rehabilitated and then generally go to a reptile refuge or sanctuary) as well as rescue of cats and dogs, and one of our current reptile residents is Milton, who is a Savannah Monitor Lizard. He is a very chill guy, and sometimes you would swear he is smiling. I had the unusual experience of holding him and doing some TTouch on him the other day. 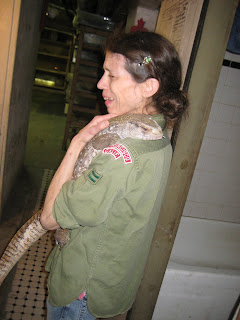 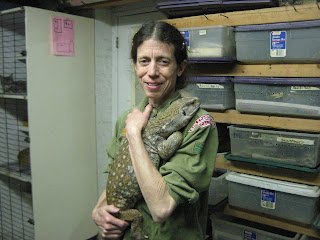 I was instructed to hold Milton rather like a baby, with his head facing over my shoulder, one of my hands under his rear end and the other behind his shoulders. What an interesting texture of skin, I had never felt anything quite like it. It felt a bit like thick, scaly leather. 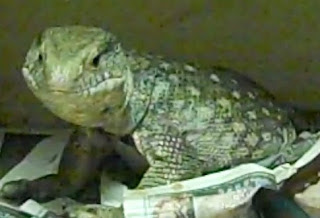 Very slowly I began to do some abalone touches (circular TTouches which use the whole surface of the hand, which can be very soothing) on Milton's back with the hand that was supporting his shoulder area. I would do a circular touch, then slide my hand to the next location, going down his back a ways and then moving to the side a bit and coming back up, pausing at the end of each circle and a quarter. At first Milton felt as though he was a bit unsure, as this must have been a new sensation. So I would pause for a bit, then start again. After a while I felt his body begin to relax down against my body. His tongue was coming in and out of his mouth, and at one point he actually kissed my cheek with his tongue.


After perhaps about five minutes (remember, with TTouch it is moments, not minutes, that we strive for -- quality, not quantity), I felt that Milton had had enough of this new sensation, so I returned him to his enclosure. He soon settled down for a nap.

Thank you Milton, for giving me this very different experience. I look forward to further contact with Milton and lessons from him. And thanks Estee, one of the very kind and dedicated volunteers at the shelter who took several of these pictures, and who does so much to help!
Posted by sarahsuricat at 10:34 AM