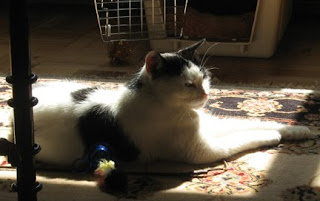 I went again to visit Eileen and her two cats, MacDuff and Misty, today. Misty is the white with black kitty pictured above and below and MacDuff is the mostly-black cat with some white who is pictured further down in this post.
This is my second session with them. Eileen has had MacDuff for several years and recently took in a 12-yr-old cat, Misty, as Misty’s owner had passed away. Duff has had a hard time adjusting to having another cat in the household. Misty has tried to make friends but Duff is not interested. And even though Eileen constantly reasssures him, it has strained the very strong connection between Duff and Eileen. In the last session, I was pleasantly surprised that Duff responded really well to me touching him (as did Misty) and Eileen told me that a short while after the session, she had found them sitting in the living room in fairly close proximity to one another, which seemed to be a good sign. 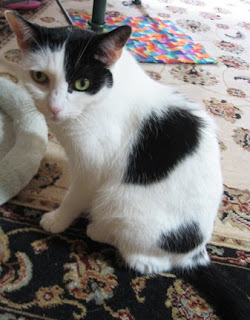 Today when I came in, I looked at Duff, who was underneath the dining room table, one of his favorite spots recently. We exchanged a few blinks, and I felt he was welcoming me. I first approached him as I had done before, by sitting on the ground with my back mostly to him, then getting closer til I could start to touch him. I did most of the touches using back surfaces of my fingers and hand – circular touches w/the back of my top joint of my fingers on his head, forehead, back of his neck.; then gradually I began to do some llama touches and strokes using the back of my hand down his body, and I really felt him relax. He let me know he was done with a little hiss, as he had done before. 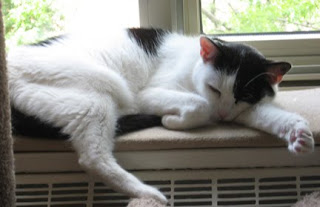 Misty was nearby in the living room and so I did some TTouches on her for a short time, then she walked away as though it was enough and laid down and relaxed in a sunny spot in the living room. I let her be for a bit and then did a bit of energy work connecting with her brachial chakra (around the shoulder area), along with some gentle TTouch on her head and back. She has had diarrhea recently so wanted to be careful not to over-do it, to be very gentle with her. She stretched out and was very comfortable, and Eileen and I sat on the floor with her, talking and touching her from time to time.
Then something happened that I could never have imagined. Out of the corner of my eye, I saw movement and realized it was Duff walking right up to me. He came up to where I was and plopped himself right on his side, his body draped all alongside of me, which is something my cat does with me, as he is very comfortable with me. Both Eileen and I were so surprised! This is something that Duff will do with Eileen but will never do with other people. And Misty was still lying right on the other side of me. I did a little TTouch on Duff while he was laying on his side, very relaxed, then when he had enough, he stood up and just walked away.

I did some more TTouch on Misty and then, before I left, did another small session with Duff, who was now on the windowsill in the kitchen. I did a long stroke with the back of my hand along his body and he stretched out completely relaxed on his side. I could tell he was very relaxed with me touching him.
Later on, Eileen called me to tell me that Duff and Misty were actually chasing each other around the apartment, which is a big breakthrough for them. I am so thrilled to share this story and to know that these cats are feeling more comfortable with each other. I look forward to working with them more and will be so interested to see what can happen with the cats' relationships with each other and with Eileen.
Posted by sarahsuricat at 5:26 PM