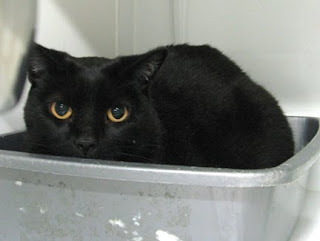 Phoebe is a cat who recently arrived at the boarding facility where I am working on Mayors' Alliance rescue cats through Tavi & Friends' TTouch-in-Rescue program. She was peeking at me from her litter box as you see above. Below you will see a video of me doing TTouch mainly on her forehead area with the back of my finger, my fingernail actually. Back surfaces of the fingers and hand are less threatening than front surfaces, so on a frightened animal I generally start with back surfaces of the hand when I first make contact with my hand.
With Phoebe I actually started out by using a plastic back scratcher, which I often use as a tool to work on an animal from a distance if they are very shy. I did little circles and strokes on Phoebe's head with the back of the hand on the back scrather. She was very responsive to this, so I worked my hand down the back scratcher til I was touching her with my hand. I did chimp touches and touches with the back of my finger on her forehead, top of head and back of head down to the neck area. I also did some ear strokes on her. I did a few strokes on her body but focused mostly on the head, as I did not want to push her too much too fast. I gave her frequent breaks, going to work on another cat there and then coming back to her and trying again, so by the end of this session she did not seem so hesitant when I opened her cage and was really relaxing into the touches, especially on the forehead. I look forward to working with her again, she is a lovely, sweet being and I would love to see her looking more comfortable.

Posted by sarahsuricat at 12:54 PM