Sometimes the cats who come into the shelter, especially feral and semi-feral cats, are so extremely stressed that their bodies feel literally frozen in place, hunched in the back of their cage. TTouch can be SO helpful for these cats.


Recently we have had several cats come in that were just a few of many that came from a hoarder - the cats were split up amongst a bunch of rescue groups in NY. The three cats which came to us do not seem in terrible physical condition but are extremely stressed. We have two black ones in one cage and one who looks like a Russian Blue in another cage.


The Russian Blue, who I am calling Starling for the time being, is rather thin and was frozen in the back of his cage. His body felt thin and I thought he probably was not eating as well, so I was ready with some wet food and some sliced turkey which I planned to give him after I did some TTouch work on him. I started out doing some raccoon touches around his ears and head, on his forehead area, and doing some ear strokes. Little by little I began to do some connected clouded leopard touches down his body as well. Little by little he began to move a bit, and even to rub himself against my hand. He still was wanting to be at the back of the cage, but he wanted me to continue to touch him so I did for a while, working on his head and his body. I could see him start to breathe more easily and to have a more relaxed expression on his face. He was becoming un-frozen. Below you will see him, still in the back of his cage, but much more relaxed than when I started with him. 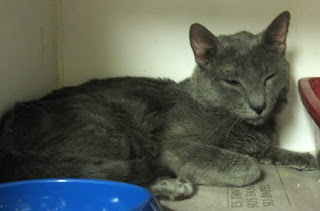 Then I put a bowl of wet food in his cage, and held out a little piece of turkey, holding it near his nose. At first he looked as though he wouldn't take it, but then he began to lick and nibble at it. Suddenly it seemed that he realized he was really hungry, and he came forward to eat some more turkey and then wet food out of his bowl. It was such a pleasure to see him feeling more relaxed, and relaxed enough to eat. The next day when I went in, we did the same thing and it took very little convicing to get him to eat again, which was great, and he was much more comfortable being touched than he had been at the beginning of the day before. And yesterday, while I was touching him, he began to come forward and rub himself against my hand. He also seems more relaxed in general in his cage, and is not frozen in one position, but will move around, look around at what is happening, etc. Below you will see me working with Starling, doing ear strokes, hair slides, little circles around his head and mouth area. Sometimes I need to improvise and use whatever part of my hand is available -- for example, you will see me using my thumb sometimes to do little circles around his head and mouth area. I am doing the touches
a bit more quickly with him than I do sometimes. I usually try to meet their energy where they are in the moment and then, if I want to relax them more, I slow the touches down. Here, he seemed kind of excited to come forward and make contact. I probably began to slow the touches down somewhat as I continued (after the video).

The two black cats, one larger, one smaller, were in much the same frozen condition in the beginning. I had very quick progress with the larger black cat, who now will respond to me and come forward right away. The little one is still fairly stiffly in hunched position, but by doing TTouch I did get her to relax her back some, and I felt her body spread out a bit more as I worked on her. Her ears are relaxed, and she even let me work around her mouth. I plan to take in some sliced turkey today to see if I can get her to eat it. She may be eating at night when things are quiet, but we want to make sure she is eating.
We also got in a couple of very terrified gray kittens, maybe a few months old. One was more afraid than the other. I began by doing very small, light circles on the head of the most fearful kitten. She started out by hissing at me but as I continued with a few circles, I could see her relax a bit more. The other cat must have been receiving some contact relaxation, because as I did this, he went to his food bowl and began to eat. By the end of the session, I worked my way up to doing TTouch directly with my hands on the head of the less fearful kitten, and was able to see the more fearful one sit in a more relaxed position. At one point, I could visibly see her let go of her breath and begin to breathe in a more relaxed manner. This is always so touching (no pun intended!) to see this happen. I wish all of these cats well. As always, if you are in NYC and want to come by and visit some of these animals in person, please feel free. More info is at http://socialtees.com/.

Posted by sarahsuricat at 12:25 AM