Welcome to the new Gang at Social Tees 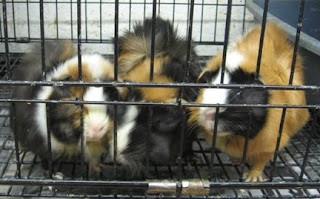 Since I was doing TTouch training for a week, I had not been able to see my pals at Social Tees (http://socialtees.com/) and when I returned there, a lot of cats and dogs had been adopted, which is terrific. There were also a lot of new arrivals. Among other creatures, the three guinea pigs above greeted me with their exuberant squeaks, and they would respond to anything I said to them with a little chorus of squeaks. I haven't done any TTouch on them yet but hopefully will have a chance to do that soon. 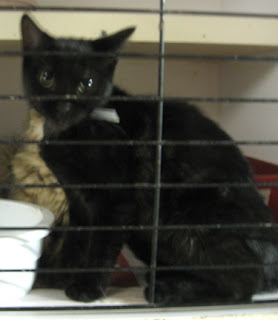 Yesterday a whole bunch of new cats arrived at the shelter at the same time that I did, and so I did TTouch first on some of the cats who had been there for a while, as the new cats were getting settled in their new cages.

This lovely little black kitten came into the shelter while I was in the TTouch training. It is recovering from a broken leg and is still limping a bit, so I took it out of its cage and put the little shoelace harness on it to contain it, and did some TTouch on it on my lap and with it on a table. It is a very friendly cat, and I was easily able to touch it on any part of its body. I wanted to do some TTouch going from the front to the back of the cat, giving it more awareness particularly of its back legs. I did connected TTouches down its body and down its leg, and some little raccoon touches on its paws as well. I wanted to try some python touches, but the kitten got so relaxed that it laid down in my lap, so I just continued doing some light chimp touches down its body and abalone touches transitioning to smaller touches on its hind legs and paws. What a sweet little spirit this cat has! 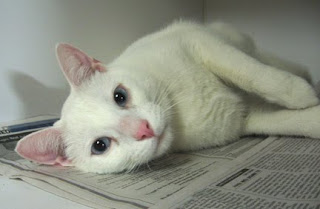 I went to the back room of the shelter, where the new arrivals were. Some of them were very agitated, and others had quickly settled in. I decided to begin working on the more settled animals, in hope that our energy would calm the other animals down another level. This would also be helpful so that there would be less chance of them bolting out of the cage the minute I opened it. I first worked on this beautiful white cat pictured above. I stood with my body sideways to the cage, spoke to the cat softly and began doing TTouch on its head and ears. I could feel that it was receptive and friendly. I began to do some small circles in its jaw area, and it turned to make the jaw more accessible to me, which was great. It stuck its chin out, seeming to ask me to stroke it there as well. It was a bit hesitant for me to touch it on its body, so I did a few touches on the body, went back to the head, a few more touches on the body, etc. Then I gave the cat a break. When I closed the cage it began to vocalize a bit but I think this may have been prompted by the vigorous activity of the cat who was underneath, which appeared to be unsettling to this cat. 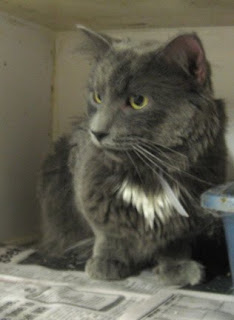 Next, I went to the cat above. It was scrunched in the back of its cage, looking very afraid. I was not sure if it would be OK with direct touch, so I first did a few strokes and circles with a feather. I had the feeling that it was ok to touch with my hands, so I very gently stroked the top of its head with the back of my hand. It seemed hesitant but started to relax as I did a few circles on its head, gave it a break, then went back again. It did not seem ready for much touch on the body, so I just did a few little strokes on its body and left it at that. It was still at the back of its cage when I finished but appeared to be less frozen, which was great. 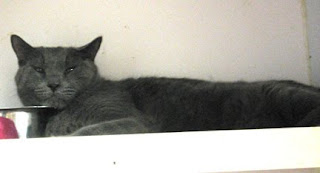 I then did TTouch on the cat pictured above and below. It was very interesting because this cat's relaxation was so visible. I wasn't sure what would happen at first because I blinked at it and it did not blink back at me, seeming to be a bit frozen. I began to do a few raccoon touches on its forehead and strokes with the back of my fingers on its head, and I could see its body let go and start to b-r-e-a-t-h-e. It looked like a ripple going down its body. It was such a pleasure to feel and see this cat relax and settle into itself.

The cat below was quite active, so I waited a while before I approached its cage, working on other cats first. When I opened the cage to touch it, it was quite receptive but very energetic so I kept my body sideways and right up against the edge of the cage, with one hand around its chest so that I could keep it contained and keep it from getting out. This was especially essential yesterday because there was a new dog in the space. I did some strokes down the cat with the back of my fingers, and chimp touches on its head and neck. I find that quite often, the cats in the shelter are very tight around the back of their necks and so that is a place where I usually do some chimp touch and find that they really can let go of their bodies once that area is relaxed. 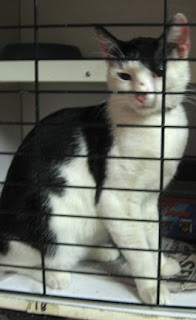 The young cat below was also very ramped-up and so I first just did some little strokes through the bars of its cage, and I did TTouch on it in several spurts with the cage open, then closing it, again, to keep it from getting out. This cat was also very friendly, but over-stimulated. Among other touches, I did some TTouch around the outside of its mouth area, which can be a key area for cats that are very worked up. As I continued to go from cage to cage and work on the different cats, also working on some of the cats who had been there for a while and needed some TLC, I could feel the energy of the room begin to calm down and even the ramped-up kitties began to take their energy level down a notch. 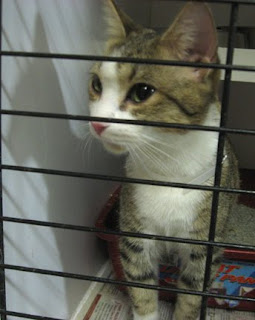 The little cat below appeared to be concerned so I approached with caution. I soon found out that I could touch it with my hands but I needed to go slowly and listen to what it needed. I did some raccoon touches in the middle of its forehead, then began to do some ear strokes. The cat really settled into the strokes on its ears, and I could feel its body begin to relax as well. As you can see, he still looks concerned but is not scrunched in the back of the cage, which was a big step for him. 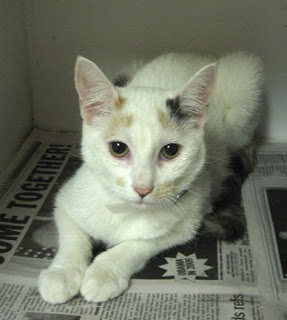 The big cat below I am calling Blizzard for now. He didn't seem to be bothered at all by all the newness and activity. I did some lying leopard touches down his body and some ear strokes, and he stretched right out to take a cat nap in his new abode.
Social Tees will be having an adoption event on Sunday 1 - 7 in front of The Bean on 1st avenue between 3rd and 4th street in New York City, so if you are in the area, come by and say hello!

Posted by sarahsuricat at 1:49 PM