TTouch Training in Dayton NJ - visit to SAVE shelter

On the fourth day of the TTouch training with Debby Potts, we went to SAVE shelter in Princeton (http://www.save-animals.org/index.htm). The shelter was clean and from what I saw, well-laid out. The cats were in two different rooms, where some were in closed cages and some had their cages open so they were allowed to roam. First, Debby did a brief cat TTouch demo. Below you will see two pictures of her as she picked up a cat by wrapping it in a blanket, and then contained the cat within the blanket or "cat tent", as she called it. 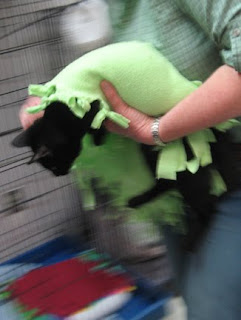 Debby could contain the cat under the blanket and do TTouches on it either on top of or underneath the blanket. Again, the success of use of the blanket depends on the cat, as some cats feel very comfortable with this but others do not like to be wrapped in anything. 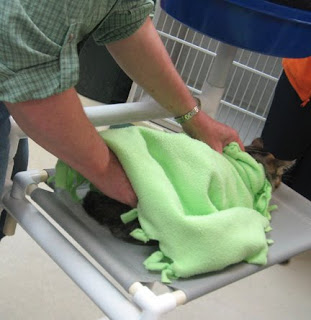 After the demo, we were set loose to work on either cats or dogs. I spent nearly the whole time with the cats. The cats have different-colored signs depending on their behavior and so I chose to work with three of the most challenging cats.
The cat below is named "Moo Kitty". This kitty had some type of digestive ailment and the sign on his cage said not to let him loose. As I wanted to make sure he didn't escape, I did TTouch o him through the bars of the cage. When I first approached him, he was curled up on his blanket. I took the wand and wrapped just a bit of ACE bandage on the end ("corn dog") so it would fit through the bars of the cage. I began to do gentle circles with the bandage end on his head. The cat soon woke up and came right to the front of the cage, where I continued to do TTouch on his head and as much of his body as I could reach either with my hand or with the wand and corn dog. I spent a good amount of time doing ear strokes on him, as these can help with digestion. I would have liked to try belly lifts but was not able to fit my hand far enough through the bars to do this. He responded very strongly to all the touches I was doing on him and each time I paused to see if he had had enough, he nuzzled against me, seeming to ask for more, so I spent quite a bit of time with him. You can see him below looking right at me with his beautiful eyes. 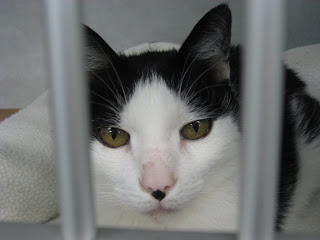 Another cat I worked on was Tabitha. She is a lovely little tabby, and is extremely skittish and afraid of people. When I first put my opened her cage, she kept trying to move away from me, so I decided to try the wand and corn dog on her so she would be able to remain a distance from me and still have contact. I would do a few circles, then pause, etc. Little by little her movement slowed down, she seemed to grow somewhat more comfortable, and I was able to do circles both on her head and on her body. She actually got out of her cage at one point (she was fast!), so I thought she might be stressed once I got her back in the cage but after I gave her a break and worked on another cat I looked over and here she was, watching me and sitting right in the front of her cage. 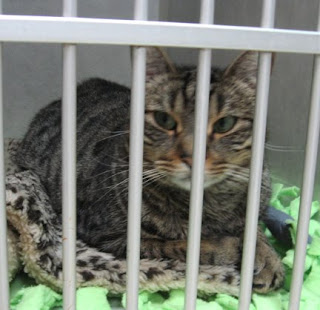 Then I worked on Snickers, a lovely smoky grey cat. Snickers was hanging out outside of his cage. He is extremely skittish and when I first reached towards him he ran away. After a while I saw that he had gone back inside of his cage, so I decided to try to carefully approach him there. 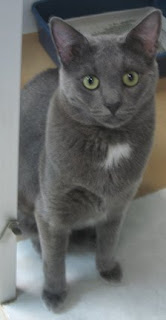 At this point the other people were outside of the room so it was nice and quiet. I turned my back nearly completely to him, sitting outside of his cage and very quietly approached him, only looking at him out of the corner of my eye as I kept my back to him so he would not feel threatened, yet I could see enough to watch his signals in case he decided to swat, etc. I was able to do some gentle strokes with the back of my hand along the side of his body. He then sat down, still in his cage but closer to me. I did some chimp touches on his head and his neck, which helped him relax and he seemed to really enjoy. I continued this for a few minutes and after it seemed to be enough, I took my hand back out of the cage again. After a bit he came out of his cage again and I started to touch him again, but he batted me with his paw (not claws) to tell me he had enough. 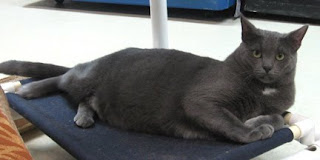 At this point we were getting ready to wind it up so I spent a little time with one of the dogs, Honey Bee, outside. Honey Bee is a chow mix who is small, but EXTREMELY strong, and it was a challenge to keep her from pulling on the leash. Debby had made a makeshift halter-like thingie using the leash, so that provided some more control but still, I had to be patient, going a few steps, stopping to do some TTouch (which the dog responded very much to), then walking a few more steps. I still need a lot of practice when it comes to "pully" dogs!
All in all, we had a really great visit at the shelter and my fellow TTouchers had lovely stories to tell about their experiences with the animals there. Sending good thoughts for these animals to be adopted to nice people very soon.
Posted by sarahsuricat at 12:44 PM