Staying in the Moment with Fearful Cats and Kittens 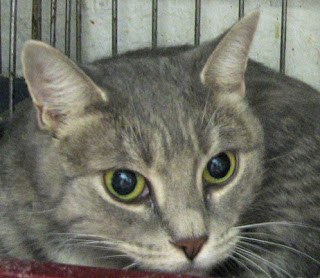 Recently a number of very frightened cats and kittens have arrived at Social Tees, and I have been working with them very gradually and quietly. The beautiful cat above was crouched in the back of her cage hissing at me at first, so I began with her by doing small circles on her head and strokes on her body with a long feather. As she grew accustomed to this, I worked my hand down the feather until I was doing circles on her head with my hand (starting with chimp touch and raccoon touch). After working on her head for a while I was able to do some connected clouded leopard touches down her body, just a few touches at first, then eventually I could go most of the way down her body. After a few days, she still stays on the top shelf in her cage, and she still may hiss initially at me but once I put my hand on her head and begin to do TTouch, she begins to rub her head against me. Lately she has looked as though she wants to come forward in her cage, but she is just not ready yet.

The sweet cat pictured above looks a little sad, but this is actually a good improvement from how he was at first. For the first few days in the shelter, I could just do a little TTouch on his head and some Ttouch down his body very briefly before he would start to try to snap at me. Yesterday I had a lovely breakthrough with him. I began to do very light raccoon touches in between his eyes and on his forward. These really relaxed him and he went from his usual rigid position where he was lying down but with his head up, to putting his head down and relaxing it. When he did this, his body felt more relaxed as well. I hope to continue our progress and to help him be more comfortable and trustful. 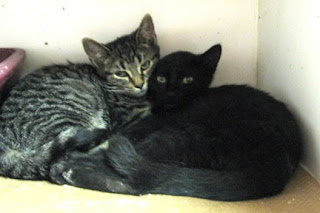 I also worked again on the three kitten in the same cage (two of them are pictured above). They still initially hiss (and even growl) a little bit but once I touch them, it is as they remember that I am going to do something that feels good and so after a few touches the sounds go away and they start to relax. I was even able to pick up one of the tabby kittens and sit with her outside the cage for a few minutes, doing TTouch on her but keeping the cage open so she could see her cage mates and feel like she could go back with them soon. 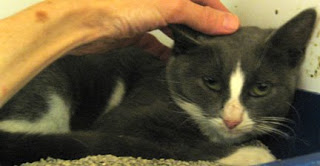 Above is pictured the other little scared kitten who I have worked on the past few days. He does still look reluctant here but I had an unexpected and lovely breakthrough with him yesterday. He also really responds to little raccoon touches on his forehead and in between his eyes, and is becoming more comfortable with ear touches as well. Initially his ears were flattened and tense, so it took a while before I could do ear work on him. At any rate, I was doing some very gentle raccoon touches on his head and for a few minutes I was speaking to some new volunteers as I did this, so I was a bit distracted. When I turned my attention back to the kitty, he had started to purr! I continued to do the touches for a while longer and he continued to purr as I did this. When I finished, I thanked him. I hope this dear little soul continues to feel more comfortable. As you can see by the picture above, he has such expressive eyes which really look so human! I wish all these creatures well and can't wait to see them again.
Posted by sarahsuricat at 11:35 AM