Reiki in the Shelter

The day before yesterday I finished Level I and II Reiki with Sheryl Berger, http://reikiforyourlife.com/, who is a wonderful teacher and a delightful person. I highly recommend her. I had the opportunity for a private class with her, which was terrific. I had previously done a Reiki for Animals workshop with her. It was also fun to see her animals again, her lovely dog Tiki and her two cats. I had a chance to do a little TTouch on her dog, who is very friendly and immediately game up to me and offered her paw to me.

So now I am able to do Reiki from a distance as well as "on location" and will also be able to do this on humans as well as animals. It is all very certainly a fascinating adventure.

Til now, most of the time that I am in the shelter I do TTouch instead of Reiki on the animals because it is more difficult to have the concentration for Reiki there, but yesterday there was a cat who I felt was very much in need of Reiki and so I gave it a try.

She is a very large white cat, and has a very bad cold, so it seems as though her congestion is causing her discomfort. Yesterday when I approached her cage she came to the front and did a little meow to me which felt like she really wanted attention. First I did a little TTouch, especially concentrating on ear strokes as this can be so helpful for the immune system and for when you have a cold or flu. Then I gently began to perform Reiki on her. I did a scan of her body and felt that the area needing most concentration was around her head, neck and chest. I did several hand positions with her, sometimes placing my hand directly on her and sometimes holding them a few inches away. Often animals can find directly hands-on to be too intense, but she seemed to crave the contact. I felt my hands become very warm and I felt her body relax more as I did the session. As it was a rainy day, we did not have adopters coming to where her cage was at the time, so it was nice and quiet. As I finished the session, I felt that her breathing was somewhat easier and she definitely felt more relaxed. If you have a look at the picture below, doesn't it look as though she is smiling? I sent her some Reiki later last night and hope to be able to check in on her later today. Thanks so much Sheryl for helping me to have another way to help the animals (and people) in my life. 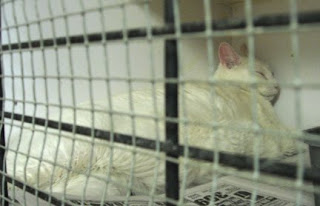 Posted by sarahsuricat at 11:28 AM