Buddy and Jayne at Bideawee: The Importance of Play 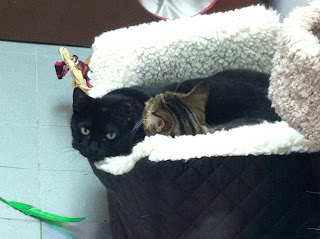 Generally the work I do is focused on helping the animals relax, but sometimes taking a different tack and connecting through play can provide another way to connect with an animal, and at times can prompt a breakthrough.  Buddy and Jayne reminded me of this the other day... 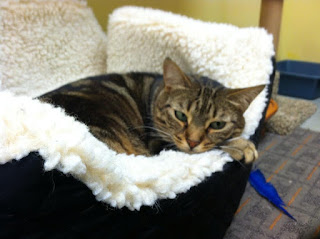 Buddy and Jayne are two very shy cats at Bideawee who I have been working with for a while.  Jayne is semi-feral, and Buddy is not feral but quite shy.  Buddy and Jayne have been in the same room at Bideawee for a while, and there have been a few other cats who have come and gone from that room as they have been adopted.  At the moment they share the room with a sweet senior kitty, Calliope.  All three cats coexist peacefully, though Buddy does try to steal Calliope's food! 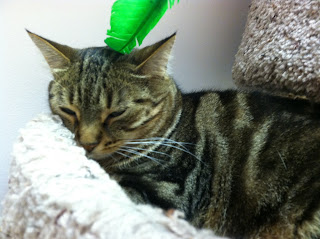 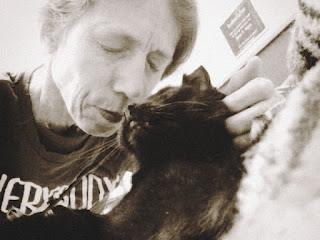 Buddy knows me well and is really friendly with me now.  He comes running up to me when I come in the room.  If he is in the litter bench and hears my voice, he comes running or rolling out of the litter bench to see me.  Jayne is still quite reserved, but progressing slowly and steadily.  She seems to really enjoy being nearby, and often I will sit in the room and share Reiki with all three cats, and she is quite comfortable with that.  At times I can do TTouch directly with my hand with her, at other times I need to use a tool such as a feather or paintbrush or the like. 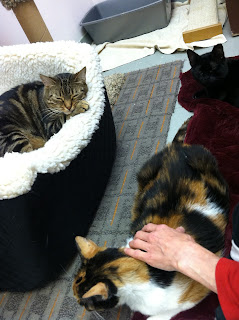 The other day I had been working with all three cats in there, and I picked up a toy that Calliope usually likes - a toy with a long stick and shiny strands coming off of the end.  Calliope was not in the mood, as she was more in sleepy mode, but Buddy and Jayne were both looking at me to see what would happen next.

I have never seen Buddy play, and I don't think I have seen Jayne really play, though once in a while she will hit a little ball around, just a bit, so she may do that when people are not around. 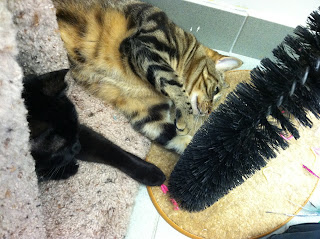 Buddy and Jayne were both underneath a cat tree,  so I started to move the toy near one cat, and then the other.  And they both started to play with the toy.  Both of them started to roll and scamper around in such a relaxed and joyful way that I had never seen before with either of them. 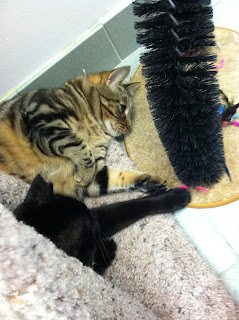 After a while, Buddy came out from under the cat tree and stood up on his hind legs to catch the toy.  I am so used to seeing Buddy very low to the ground, this was really different! 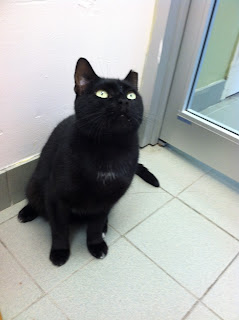 Buddy looking up, about to leap up at the stick toy

This was such a delight to see, I felt my heart opening as I felt a huge energetic feeling of opening happening in the room.  I felt such joy as I saw Buddy leaping for the toy, and Jayne rolling onto her back and stretching and reaching for the toy.  The free feeling of seeing them playful, unafraid, happily engaged in play.  It was such a beautiful, spontaneous thing that unfortunately I didn't get video of it, just a few quick still shots which you see above, but hopefully I will next time! 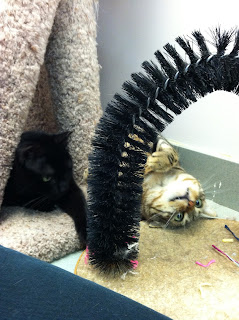 That night, as I went to sleep, I still could picture the two of them rolling and scampering around, and it made me feel such joy in my heart.  I felt again that beautiful sense of opening.  I can't wait to see them again - maybe next time we will get Calliope to join in a bit!
Posted by sarahsuricat at 2:23 PM