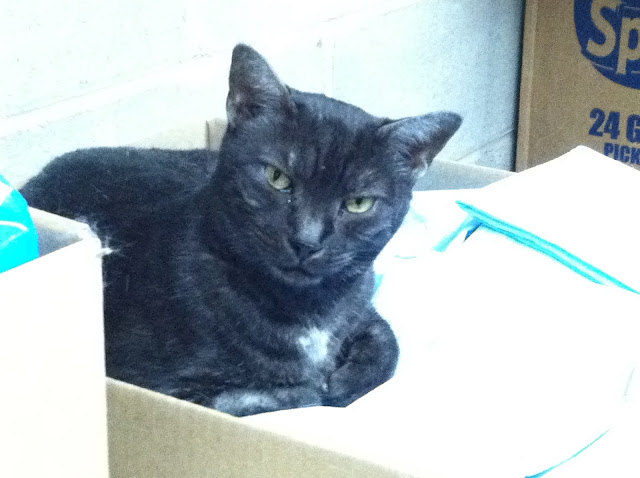 Sylvie is a beautiful black cat with tabby markings and a silvery-white undercoat, hence her name Sylvie.  She was abandoned in the Chelsea area of Manhattan in a roller suitcase.  A security guard found her and brought her to Downtown Veterinary Clinic, where they kindly took her in.  She is living in their office roaming free in a quiet room downstairs from the treatment rooms. 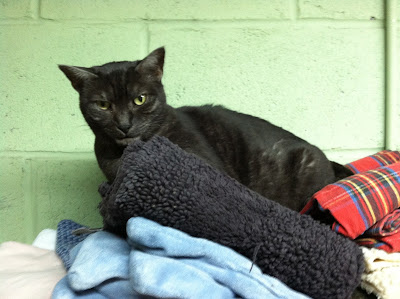 Sylvie was OK with the people when she first arrived, but after initially not minding being handled (probably frozen and in shock), she became defensive and would swat and hiss at people and other animals.  There is another cat who is living in the room with her at present, Mama Cat, who is very friendly, but Sylvie is afraid of her.  The clinic asked if I would come to work with her.  Above is a photo of her early on, not such a happy camper!  but, things got better . . . 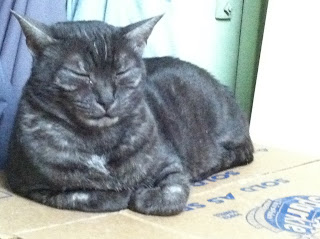 Initially, Sylvie hissed at me when I walked towards her and said a gentle hello, but I just sat quietly near her and began to let Reiki flow.  After a bit, I started to see her relax her body and her face.  I felt her taking the energy in, and saw her do a few sighs as she relaxed and got herself into a more comfortable position. 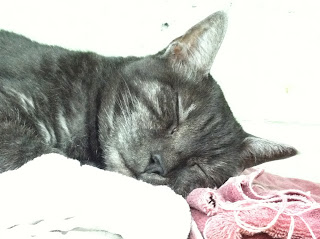 In the second session with her, perhaps a week later, I started out by connecting with Sylvie with Reiki again, and then decided to try some TTouch with her.  She was facing away from me at that time, which can either be comfortable for them, or can be a position which is too surprising for them to be touched.  So I started by doing some “air TTouches” (doing the circular motion of the TTouches, but off the body), and then began to do some TTouches on the top of her head.  Initially she hissed, but after a couple of the circular motions, she settled into it.  As she got more relaxed, I was slowly able to transition to using my hand to do the TTouches.  I would pause every now and then to let her process and to assess whether I should continue or stop.  She continued to relax into the TTouches.  I was surprised to actually be working hands-on with her so soon.

At one point during a pause, she turned herself around to face me.  I decided to see if she would be comfortable with me approaching her.  I started again with the paintbrush.  I think this time I was using the handle of the brush.  I often try different surfaces of a tool to see what the animal is most comfortable with.  And after a while, again I was able to transition to TTouching with my hand.  I was working on the head, forehead and back of the neck, and eventually tried some TTouches around the outside of the mouth, cheeks and under the chin, and she began leaning into my hands.  Wow! In those moments I felt her let her guard down and really connect with me.
Below is a clip of some of what happened during that session.


In the next couple of sessions, I realized that I would need to take a step back from what had happened in that session.  I needed to take each session as a new event and really just be in the moment with her to see what she was comfortable with.  That is really what I do anyway, but what I mean is that sometimes one has to take some steps back before moving forward again.  Sometimes she was comfortable with TTouch, other times she just wanted me to sit close by and connect with Reiki.  I also would give her treats each time, which she loves.  Sometimes I would just put them on the ground and other times she would take them from my hand. 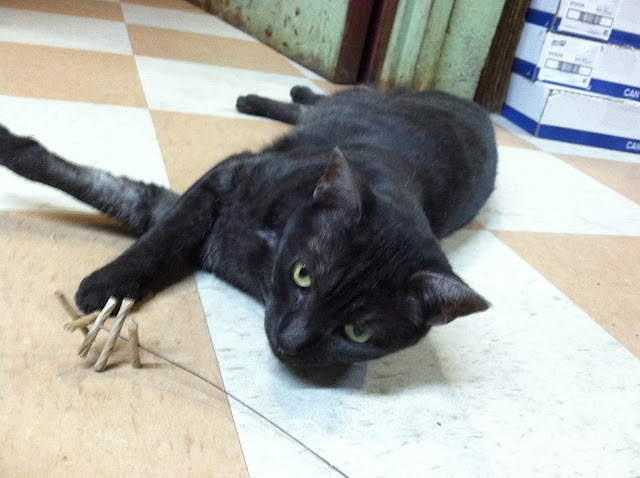 Above: Sylvie with Cat Dancer (I later discovered she liked this in addition to the cat catcher)
I felt I wanted to throw something else into the mix to see what would happen.  It was time to see if Sylvie would play.  I brought with me a toy that most cats seem to really enjoy, called the Go Cat Cat Catcher.  It is a short wand with a wire and a mouse on the end of the wire.  The mouse looks pretty realistic, and I think the wire and the way it connects with the mouse does something special as well.  Anyway, I showed Sylvie the toy, and immediately she came down from her perch on top of a box and began to play with it.  The other cat, Mama Cat, came over too, so that was a bit of a challenge.  I would alternate between one cat and another, and would try to maneuver myself so I was staying in between the two cats to avoid trouble.  Mama didn’t have any problem with Sylvie getting close, but Sylvie would hiss and swat at Mama if she got too close.  I kept it short and sweet, and was delighted to see Sylvie actually playing, running and leaping in the air to get the mouse.  I think she surprised herself!
Later on, Sylvie jumped inside of a box that she likes, and I was able to continue playing with her there, without Mama getting into the mix.  So that worked very well.
In sessions after that, I would often start by giving Sylvie a few treats.  I would generally put them on the ground, and then use a wooden craft stick (looks rather like the wooden sticks doctors use to look in your mouth, with rounded ends) to do Ttouches on her head, and then eventually her body.  More recently, I have been able to directly TTouch her head and her body while she is doing this. 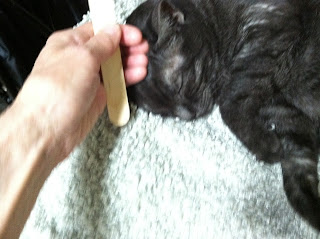 After that, if she seems interested in play, we will do that.  Or if she seems more in relaxed mode, we will do some Reiki and then some TTouch.  Generally with the TTouch these days, I have been using the wooden stick instead of the paintbrush, as that seems to be what she is comfortable with.  I start out by stroking her around the side of her face, and she leans into it.  Then I am slowly able to start TTouching around her head and eventually on her body with the stick.  Once she is comfortable with that, then I slowly transition to using my hand.  This usually means using one or two fingers initially to do the TTouches, and I am usually using the back surface of my fingers, which is a less invasive feeling than using front surfaces of my hand.  Or if she is not quite comfortable with my hand that day, I stay with the stick. Sometimes she is able to get really relaxed and completely lay into my hand. 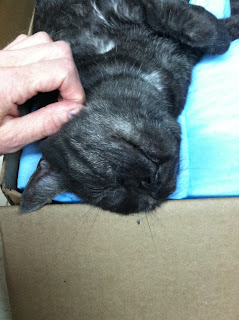 It makes me smile to look at these pictures and know that she can be this at ease. 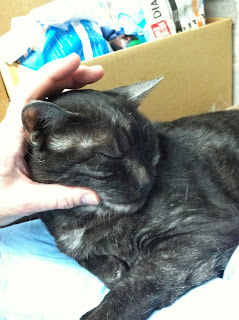 And I know that in time, it will be easier for her to be able to get to this place, but it takes time, and patience. 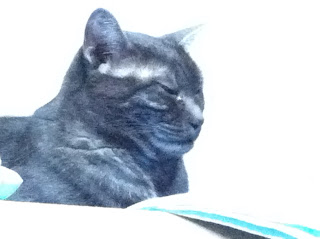 The idea is to work very gradually, doing pauses, watching her body language and feeling what she is comfortable with.  Ideally it is great to stop before she feels uncomfortable, but in any event, if I see something that tells me she is uncomfortable, I pause and give her a break.  Sometimes I can start again, other times it is better to either give her a longer break, or stop for the day, or back off of direct contact and either do some gentle energy work, or if it seems that she is in a playing mode, we will do that.  I use a lot of positive visualization with her as well, seeing her as confident and relaxed.


One day after a play session, Sylvie ended up settling right near where I was sitting.  It seemed that she felt safe there. 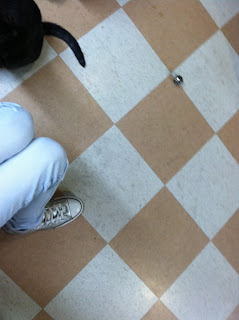 I just sat quietly and offered her Reiki for a while. 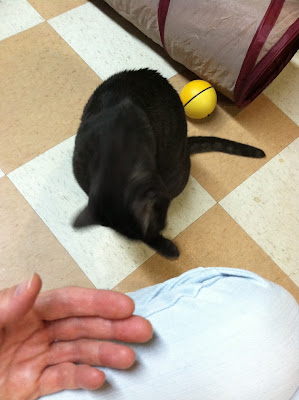 Mama had been playing with us as well (I was sitting in between them and playing with one, and then the other), and later on there was a point where they were laying very near each other, and both seemed pretty comfortable.  This was great to see! 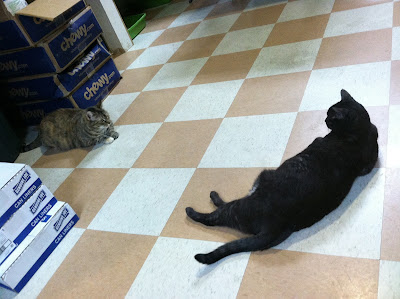 Sometimes Sylvie looks straight at me as if to check in with me, and I tell her that everything is all right. 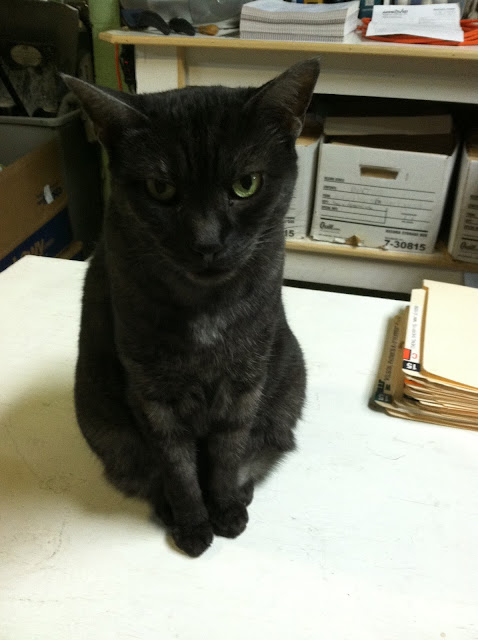 Below is a clip which shows some of what we have been doing over the past few weeks.

With every session, she is getting more comfortable with me, and during most of the sessions, she is comfortable with me doing quite a lot of direct TTouch.  What usually happens these days is that I will begin the TTouch with the stick for a few minutes, then quite quickly transition to touching her with my hands.
Sometimes she is inside a cardboard box, which is one of her safe hidey places, so I might just do Reiki with her if she is in there, or stroke her with a stick while giving treats, as she is not so sure about being touched when she is in there. 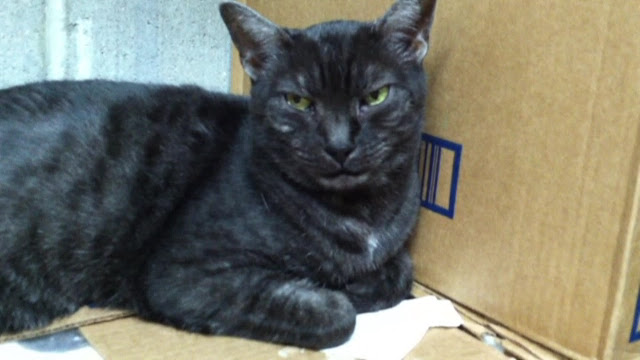 It is all about being sensitive to the moment, and to what she is ready to do at that time.  Sometimes I will nudge a bit at the edges, but I will err on the side of caution so there is less possibility of her being frightened.  Even on the days when she feels more like being in the box than coming out and interacting, now she will look at me with a more open and trusting expression. 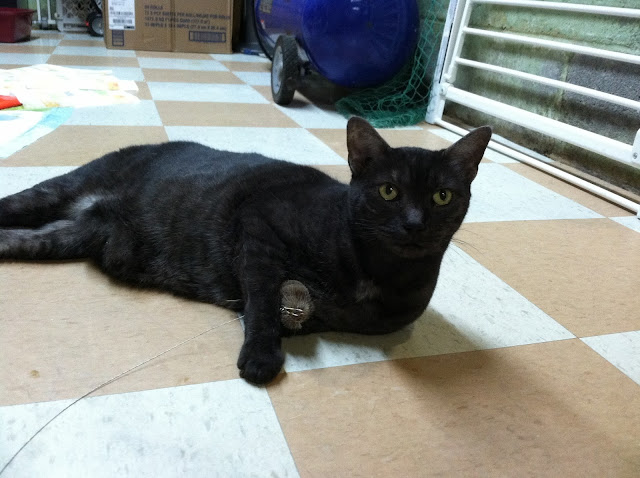 Her whole facial expression and demeanor has started to change.  Her face is much more open and relaxed, and I feel more trust from her all the time.  It is wonderful to feel her becoming more and more comfortable.
The staff have started to be able to interact with her a bit, and my friend Carol, who is a wonderful trainer who works at the office, has been doing play sessions with her, so that is great.
I am so grateful to the clinic for rescuing her and for their kindness and care, and look forward to continued sessions with her!
Posted by sarahsuricat at 12:38 PM