Alison at BARC Shelter: Patience, a Gentle Approach, and a Heart Connection 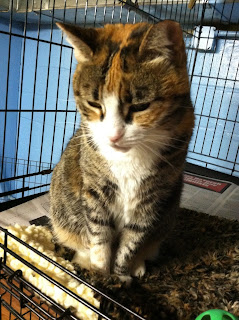 This is Alison, a beautiful calico kitty who I have been working with at BARC Shelter.  She was brought in by one of the long-time volunteers.  Apparently she had been outside, but was quite friendly with her rescuer.
However, the shelter environment is tough for Alison.  She does not like other cats, so being surrounded by other cats makes her extremely tense.  And she is very wary with people as well in this environment, becoming overstimulated easily and swatting and hissing at people who approach her too quickly.
I have been working with her very slowly and gradually, using a back scratcher (there is a wonderful one at BARC now that has an end that is like a plastic spoon that she particularly likes, also one with a shoe-horn type end which she also responds to), or sometimes a paintbrush to start with, and then transitioning to touching her with my hand if she seems comfortable enough to do that.
I have found that she is extremely responsive to Reiki, done a short distance away from her.  She has grown to recognize the energy and settles right into it now.  She starts to close her eyes and get a cozy look on her face, and her body begins to relax.  And that has really been key in establishing trust.  She associates the relaxing energy with me, and knows that I may not necessarily even try to touch her, so she doesn't go on guard when she sees me coming.
About a week ago I went to work with her, and I had not worked with her in a while so I was not sure how it was going to go.  But I could tell immediately she felt the Reiki energy.  And it seemed a connection to the energy that was stronger than I had seen before.  Like she was absorbing the concept that this felt really GOOD, and I was seeing her bask in it. She paused her movement, and her eyes got that squinty look like she was taking it in.  I was standing with my hands outside the cage, palms up, and the cage door open. 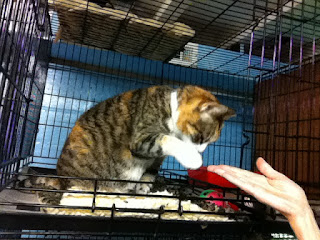 And then, she did something she had never done with me before.  She came right to the front of the cage, and extended her paw to me. 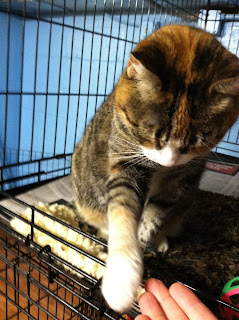 Not a gesture that was going to turn into a swat, a gesture with a soft paw that gently touched my hand.  I praised her, and asked if she would like to do it again, and she did.  She did the same thing three or four times, just reached her paw to my hand to gently touch it.

Then she came forward and began to rub her head on my hand.  I didn't want to push the issue, so just let her do the rubbing, did not start stroking her at that time.
All the while I was letting the Reiki flow, and I could tell that she was becoming relaxed by it.  After a bit, I approached her with the spoon end of the back scratcher, doing little circular TTouches with it around her head.  I was also speaking very softly to her, which helps her to relax as well.  Eventually I worked my hand down the back scratcher, and began doing soft TTouches on her head directly with the back of my hand.  The back surface of the hand is less intense-feeling than the front surface, as there is less heat coming out, so it can feel more comfortable for frightened or sensitive cats. She settled into it completely and curled up and laid her head down.
This was a longer period of contact than I had ever experienced with her before.  And it was as though her heart was gradually opening, and I felt a surge in my heart, our hearts connecting. 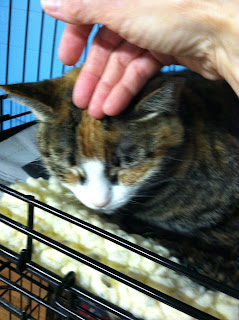 The next time I worked with Alison, again I began with Reiki, and she came to the front of the cage to nuzzle against my hand.  As before, I could see her absorbing the Reiki - she would get very still and close her eyes, taking it in.
After a while she went to the back of the cage and curled up on her cat bed.  I began to do some TTouches with her on her head with the spoon end of the back scratcher. In the following video, you can see a bit of the sequence I did with her.


When she became quite relaxed, I worked my way down the back scratcher, and began doing the circular TTouches directly with my hand.  I used the front of my hand this time, and I kept the feeling very soft, and felt the texture of my touch very soft and gentle.  She completely relaxed into the TTouches and went to sleep. 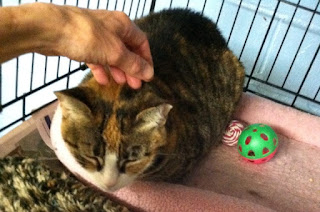 After a while, I gave her a break, working on another cat for a while.  Then I came back again, first starting with TTouches with the back scratcher, then with my hand when she felt more at ease.  This time it was a shorter span of time to work up to TTouching her with my hand. 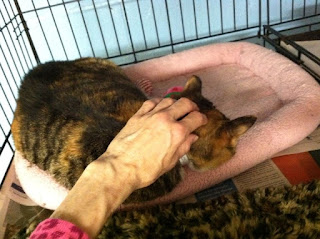 I did this same sequence a few times that day, and each time she settled into my hand.  It was really beautiful to see this and feel this, to feel her relaxing and feeling open and comfortable.  A significant shift, and each time I see her, I feel a stronger and stronger connection with her, and more confidence and trust. 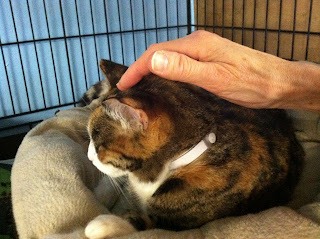 I told some of the regular volunteers what had happened and the sequence I used, and encouraged them to use the back scratcher with her, and not push the touching but to just follow her lead with that, to let her come to them. 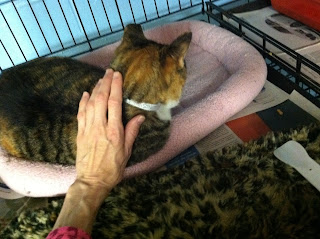 I have already heard from a couple of the volunteers that they have been able to have more contact with Alison than before, that she is more at ease with them.  And my friend and long-time volunteer Mary said that Alison reached out to her with her paw the same way that she had done with me last week.  So sweet!! Her increased comfort will also help increase her chances for adoption, which is great.  I believe that in a quiet home with no other cats, she would blossom. 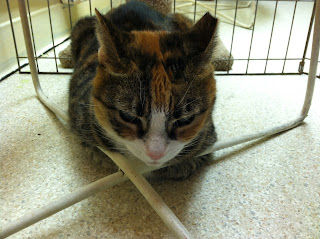 The next challenge is to help Alison to be more comfortable in the play room.  This is more difficult for her, as she is able to see the resident dogs and other cats from within the play room space, and she is not so used to the space either, so it is still hard for her to be relaxed there.  So when I am in the play room with her, I do not try to make much physical contact, but mostly do Reiki from a short distance with her. I also speak to her softly, and sometimes quietly sing to her as well. Currently we have her inside of a x-pen when she is in the play room so that the space does not feel so big for her.  But I am sure in time, this will be more comfortable for her as well.  Here you can see her pretty comfortable, taking in the Reiki energy.
Much love to you Alison!!  Look forward to seeing you soon (unless, of course, the perfect person or people take you home)!  xoxox
Posted by sarahsuricat at 10:05 AM