The Adventures of Emmylou and Natalia: The Journey Continues...

Emmylou (right) and Natalia (left) are my two cats who were brought into BARC shelter as ferals, and I adopted them last July.  Our journey together has been and continues to be such and interesting and beautiful one.  We are continuing to learn from each other every day.

In general, they are doing great and they have come such a long way since I brought them home in July.  They are now very at ease in the apartment, and with me, and are recently have been breaking though to a greater comfort level with my partner (they have been comfortable with him in general for quite a while, but now are much more at ease with receiving pets and some TTouch from him).

I feel that I have broken through to another level with them recently as well in terms of contact.  Every day they approach me more often for affection, which is so sweet!  When I get up in the night to use the bathroom, Natalia will wait outside and I sit on the floor with her for a while for TTouch.  And during the day they both approach me, sometimes taking turns (one will be sitting looking out the window in the cat tree while the other comes into the living room for attention.

They adore each other and, though they may hang out separately at different times of the day, at night they are cuddled together on the couch, looking like a yin/yang symbol together.

I have continued to find that keeping a routine is very important to their comfort level - keeping the feeding times as consistent as I can, having certain times of the day for play, etc.  It is great to have a play session with them right before we go to sleep, and then they most often settle in to sleep when we do.

It is good, also, to have variety within the routine - rotating which toys are used, trying some different TTouches with them, etc., to keep things interesting for them.  Even something as simple as creating a couple of tunnels with shopping bags with the bottom cut out can be a new fun game for them. 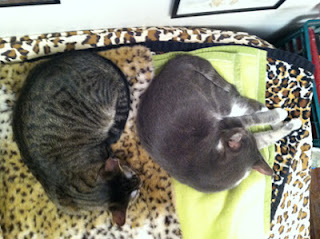 I am always working towards little goals with them, as well.  Mostly these have to do with more practical matters.  For example, it is good to be able to pick them up, so when it comes time to need to get them into a carrier (which hopefully will not be soon!), it is not a shock for them.  Getting them used to having their paws touched (eventually for nail-clipping) will be another one.

It has really worked out well to do everything with them at a very gradual, slow pace.  If I do something and it feels like I went a bit too fast to that step, I take a step back and break it down a little further.

Emmylou is actually a bit more skittish in some ways, but for some reason she seemed to be ready for the picking-up activity sooner.  I started out by first getting her used to being touched on her stomach, doing a few circular TTouches on her stomach at a time, then letting it go, just doing this for a few seconds here and there, at regular intervals.  I actually started doing this with her when they were in the cage and we regularly fed them baby food (always all-meat baby food, no onions, Gerber or Beech-nut) off our fingers.  First we let them eat the food without trying to touch them while they were eating, then started stroking them or doing a few TTouches while they were eating, and then having more and more contact and touch while they were licking the food off.  Natalia was more reticent about being touched while she was eating, so we went more slowly with her.  Emmylou loves the food so much that she was more ok with being touched, so I started doing little TTouches on her belly, and then sometimes a little circle and then a lift on her belly, then sometimes lifting her slightly off the ground.  When they started being out of the cage, when she was walking, I would do little TTouches and then sometimes a belly lift (both hands under belly, eventually lifting her up slightly off the floor.  When I put her back on the floor, I praised her and did hair slides and circular TTouches to make her feel comfortable, so the lifting became just a little part of this whole activity.  Eventually I started lifting her higher and higher - just for a couple of seconds each time, then put her down and TTouch etc.  Now I am at the point with her where I can pick her all the way up to waist-height, do a few pets, then put her down.  This has taken place over months, so it has been very gradual indeed!

Natalia, while she really responds to being touched, easily gets scared if she feels she is being cornered or contained, so I have had to go slower with her.  For a while, I did circular TTouches on the side of her belly.  Then I gradually was able to do some TTouches under her belly.  Then, when she was in a lying-down position, I was able to do TTouch belly lifts with her, just one or two at a time.  In that case, by belly-lift I mean just gently putting a hand under her belly, making the slightest movement upward, holding for a minute, then slloowly releasing.  See my clip at http://www.youtube.com/watch?v=uRDUdMh49CE&list=UUwClW-vMPW6i_UFDkXXayEA&index=32.  Just last week, while she was walking, I was able to put my hand behind her front legs, just gently lift her chest and front legs for a moment, then gently put back down, give lots of praise and TTouch, etc.  When I tried to put both hands underneath her and lift all four feet off the ground, this still made her nervous, so I backed off of that and went back to doing TTouches and lifts on her belly area.

The day before yesterday, I decided to try lifting Natalia up a few inches off the ground again.  To my surprise, she didn't react at all to this.  When I do these lifts, I get ready by doing some zigzags and circles on her while she are walking (I am walking behind, leaning over).  Then I just put both hands underneath her belly, lifted her off the ground a few inches, just for a second, then put her down - immediately praising her and starting to do TTouches and strokes with her.  I think I have to film this at some point to be a bit more clear about it!  Anyway, she was not startled at all - went right with the flow of what I was doing and laid down for some TTouches.  I gave her a break for a few moments and then repeated the same procedure, and the second time the same thing happened - which was great ! I think I did try a third time as well.  After that, and a few TTouches, I backed off to see what she would do and she just went over by the radiator, one of her cozy places, and was staring at me, purring!!

Yesterday I tried this again with her, and again, she was completely comfortable, as if the lifting up is part of the whole TTouch and affection process.  So, little by little, I will be able to lift her up a little higher.  So important to always be patient and listen to what they are ready to do.

If anyone reading this has further questions, please always feel free to contact me through my website, http://healingenergyforanimals.com.


Thanks Emmylou and Natalia, for being the lovely beings that you are - you are teaching me so much and filling my life with so much richness and joy. xo
Posted by sarahsuricat at 12:19 PM