From Fearful Feral to Comfortable and Friendly: The Transformation of Berry 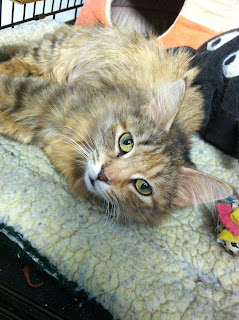 Berry is a feral cat who was rescued from the same back yard as my two cats, Natalia and Emmylou, and brought to BARC shelter, as they were.  I am sure that both her feralness and the fact she seems to be related to my two has helped me to feel such a special connection with her.
She has come such a long way!  When she arrived at the shelter, just before Hurricane Sandy, she was absolutely terrified.  She would hide at the back of her cage and hiss, swat, and sometimes try to bite when approached.
I began to work with her VERY gradually.  My first few sessions with her were extremely short.  I would send her Reiki from outside the cage, then open the cage and stroke her a couple of times with the back scratcher, then close the cage again.  I would try several sessions a day of this.  I would always talk to her, too, in a quiet, friendly voice, expressing how happy I was to see her. 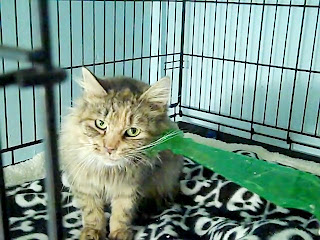 At this point, sometimes she would get confused between play energy and affection, sometimes starting to swat at the back scratcher.  I tried to keep the sessions short, giving her breaks, to hopefully avoid getting to the swatting point.  And, over time, this has really paid off as well.  I do advise people not to stick their hand straight towards her (generally a good tip, as that can be too scary, especially for rescue animals), but to kind of approach her more from a diagonal, touching her first on the back of her head or side of her body.. 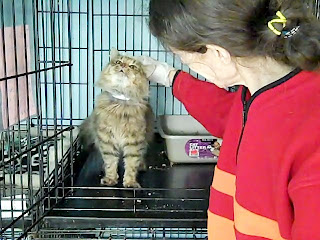 Now other volunteers can approach her and pet her with the back scratcher as well, and she is extremely responsive to it, rubbing into it.  When she sees the back scratcher, she knows that something that feels good is about to happen, so she will often come forward in her cage even with a less familiar person.  Last week one of the shelter people who had not seen her in a while didn’t recognize her because she was calmly sitting at the front of her cage. 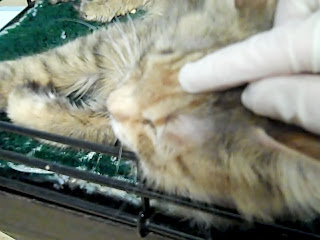 And, over time, I have also been able to have more and more direct contact with her, which has been an incredible experience.  I have found that by incorporating the calming energy of Reiki and the TTouches, it has helped to calm her energy.  So sometimes I still will start out by touching her with the back scratcher with TTouch circles and strokes, but then very quickly am able to transition to using my hands.  But the past week or so I am more often comfortable with approaching her directly with my hands.   She still is having some issues with upper respiratory (being treated with medication and nutritional supplements), so she has been especially responsive to raccoon TTouches on the center of her forehead, which seems to help relieve her sinuses, and the TTouch ear strokes (there are acupressure points in the ear that affect the respiratory and digestive systems).  TTouch does not replace veterinary care but it can help the body to be in optimum balance so that it is able to heal more effectively.

Often in the process of doing the TTouches she will just lay down with her head resting at the edge of her cage, as you see here.  She also probably would come out on my lap, but we aren't doing that, at least not yet, because we don't want her to get frightened and get loose in the shelter. 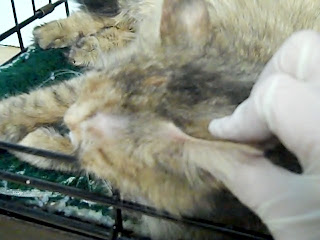 I still will give her breaks when I think she needs them, during which I may just sit and continue to send her Reiki, and I can see her relaxing into the waves of energy.  Or sometimes I will really give her a break, walking away for a bit, then returning for more.

It warms my heart so much to see her respond to me calling to her by coming right to the front of the cage, kneading her paws in anticipation.  And I am honored to feel such a loving, trusting connection with her - that she feels comfortable enough with me to trust that she is safe with me.  It feels like energy waves of love that pass back and forth between us as I work with her.
Thank you Berry, I am so grateful to be on this very interesting journey with you and it is beautiful to see you so much more at ease and getting so much enjoyment out of contact with people (and she seems to be interested, rather than fearful, of the other animals at BARC as well).  And thank you to the staff and volunteers at BARC Shelter, thanks so much for all you do for the animals, and thanks for being so kind to Berry and to all the animals there. xo
Posted by sarahsuricat at 11:25 AM