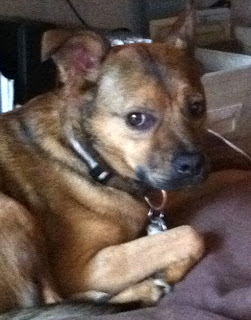 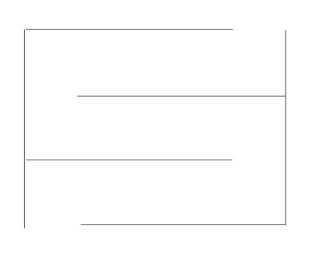 ﻿
I had Kate walk Jonesy towards the labyrinth, but he was frightened and did not want to go in.
At this point I knew we had to give him a break and then think of what to do next.  We let him sit down, gave him some treats and I did some TTouches with him.
Then what I did was dismantle the labyrinth and configure what looked like a narrow path, using four of the dowels (two on each side of the path). as in the following: 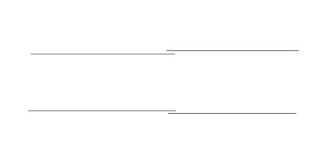 ﻿
Though Jonesy was still somewhat reluctant to go through the path, he did go through once, lured with treats.  Then we stopped for a minute, and went back the other way, again lured with treats and stopping on the other side.  Then she was able to walk him all the way through the path more easily, giving a treat at the end, then back the same way.  It got easier each time.  We then gave him another break with TTouches and treats.
Then I reconstructed the original labyrinth, to see if he would walk in.  This time, Kate was able to lead him into the labyrinth with no hesitation, which was wonderful to see.  At each turn in the labyrinth, I had her pause with him and give him a treat, so it wouldn't feel like too much at one time.  We did this several times, and each time Jonesy seemed more comfortable with it.  Amazing to see this whole transformation, from him being scared to enter the labyrinth to being very comfortable with it.  This whole section of the session with the labyrinth had only taken about fifteen minutes, yet so much had taken place.  Once again it brought home to me the concept that one needs to let the dog have a choice, and to break tasks down into smaller tasks if they are resistant to what you are asking them to try.
Again, we ended the session with a Reiki session for Kate, which left the apartment with a very calm atmosphere, and Jonesy was curled up and cozy on his bed.
Thank you Jonesy and Kate, it is such a pleasure to work with you and Jonesy, I am still feeling you giving me a kiss.  What an honor that was!  Look forward to seeing you soon, and to seeing what can happen next....
Posted by sarahsuricat at 4:35 PM