Moment to Moment with Mrs. P and Mrs. Q 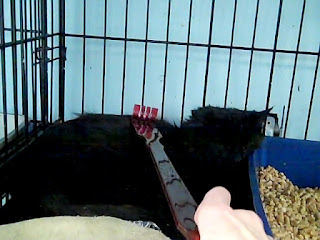 Mrs. P (above) and Mrs. Q (below) are two beautiful young cats who were feral or at least semi-feral, who had been rescued and brought into BARC Shelter at the same time.  Both cats were terrified upon first arriving at the shelter.  Mrs. Q was literally climbing the walls of her cage at first, whereas Mrs. P curled up in a ball at the back of her cage.
With a cat who is new in the shelter, I most often approach them with a tool of some kind, to give them some space, and for the safety of both the animal and me, as I am often not sure how they will react to being touched.  I started with Mrs. P with a back scratcher, which has a long handle, which is especially helpful in this situation so that I didn't have to lean way into the cage﻿, as she was all the way at the back.
After a few TTouch circles and strokes with the scratcher, it was clear that she was not aggressive at all, just very frightened.  I worked with her a little at a time, giving her breaks, and soon worked my hand down the back scratcher to touch her with my hands.  I did some hair slides, which are very calming (see my youtube channel http://youtube.com/sarahsuricat for a demo of this), as well as some of the circular TTouches.  Pretty soon she started to stretch out her body and become more comfortable. 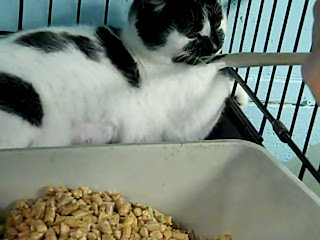 I knew that I would have to go much more slowly with Mrs. Q.  The picture above is actually after I had worked with her a few times.  Before even opening her cage. I went to the side of the cage and tried an approach which I used with one of my cats, Emmylou, when she first arrived at the shelter.  The idea is to be as gentle and non-threatening as possible, and to go slowly to determine what they are comfortable with at that given moment.
What I did was to speak to her very softly and I didn't even touch her quite yet.  I used a paintbrush and stroked the air about an inch or two parallel to where her whiskers are.  So it was as if I was stroking her whiskers, only I was slightly in front of them.  I just did this a few times and stopped.
After I moved the paintbrush out of the cage, Mrs. Q got more relaxed, changing her body position to a much more relaxed position, lying down with her front paws tucked under her body.  I tried this a few more times, and little by little she became more relaxed with me.
The next time I worked with her, I started out the same way, and also did something else I had done with Emmylou that had worked very well.  I stroked gently down the front of her front legs, and down her paws.  I know, one would not necessarily think this would be something a cat would like! But I have seen some very scared cats respond to this approach.  I know that in TTouch for horses, people stroke down the legs of the horse with wands to comfort them, so there must be something neurologically calming about this.
After working with Mrs. Q a few times just through the cage, sitting to the side of her cage, then I was able to open her cage and begin to do TTouch circles on her body with a paintbrush.  As you can see from the photo above, at first she was a bit startled by this, but eventually the TTouches began to calm her.  I did TTouch circles with the paintbrush down the sides of her body, and along the sides of her mouth.  Once in a while I did some TTouches on the top of her head as well, but not till a bit later on, as this was a scarier area for her to be touched.  Each time, she would be a little nervous at first, but then each time I worked with her, the nervous time has gotten shorter and she has settled into touch more quickly. 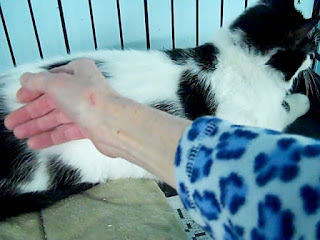 Now I still start out by using the paintbrush, but can usually progress quickly to TTouching her directly with my hand.  I most often will start with the TTouches using the back of my hand, as that is less intense than the front of the hand.  I have to go a little bit at a time though, as she still can be nervous about this.  At times she is completely receptive, but other times I may just hold my hand still to send Reiki energy very gently, then do some more TTouches.
Mrs Q has been more and more interested in play as time has gone on, as well.  Many of the volunteers can play with her, and she is responsive to that.  Mrs. P has started to play a bit as well. 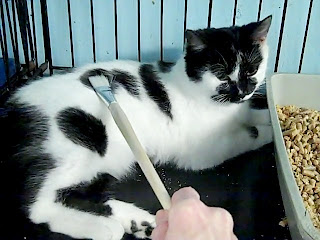 Meanwhile, Mrs P (below) was becoming more responsive to touch as well.  I was doing TTouches over most of her body, on her head, and even sometimes on her paws.  As you can see by the photo below, she will most often relax on her side and in this picture, she was very receptive to very light little circular TTouches on her paws.  Again, this was a surprise to me that she would be comfortable with me touching her paws, but when she is in the mood, it seems to be very calming for her. 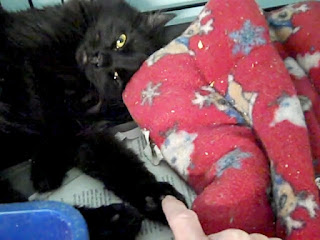 Recently I started another element to my work with these cats:  treats!  As both cats are much more comfortable, but still often remain at the back of their cages, I have wanted to see what I could do to encourage them to come forward.

I have used baby food as a tool in socializing my cats Emmylou and Natalia, and have often used it in the past for socializing kittens.  All-meat baby food with no onions is what works best.  Gerber turkey in turkey gravy is what I most often use - I was advised of this by Mike Phillips, who runs Urban Cat League and from whom I took a wonderful seminar on working with feral cats.  It helps the cat learn not to be afraid of human hands coming in their direction, and they learn to gently lick, rather than bite, fingers.  Don't try this if you are working with an aggressive cat, because you could very well be scratched or bitten!! But with a non-agressive, shy cat of any age, this can be a wonderful tool.
Both of these cats were reluctant at first to take the baby food.
With Mrs. P, I found that if I did TTouch circles around her mouth area, then offered her the food and continued doing TTouches under her chin and around her head, she would take the food and then, as she got more comfortable, I started to be able to encourage her to come further and further forward in the cage.  At that point, at first I just let her take the food. then after a couple of times, I approached her diagonally with my other hand, going right to her back instead of her head, so I wouldn't scare her, and she was very comfortable with me TTouching her as she tood the food.  So sweet to see her coming forward!
With Mrs Q, it was a matter of patience, waiting for her to take the food. as she just looked at it at first, not quite comfortable with my finger being near her mouth.  Then I just touched my finger gently to her mouth, so a bit of the baby food was on the outside of her mouth, and once she licked it, she realized that it tasted very good.  She still was a little nervous about me being that close to her, so I just did it a few times with her, and will start leading her forward sometime soon.
It is beautiful to see how much progress these two creatures have made in a very short time, especially considering how terrified they were upon first entering the shelter.  They remind me a bit of my own two cats, who were just a few months older than these two when they were brought in from outside.  I know I am learning at least as much from them as they are from me, and I feel honored to spend time with these special beings and that they feel comfortable enough to connect with me.  And of course thank you to BARC shelter for all they do for the animals,
Posted by sarahsuricat at 3:29 PM