TTouch and Reiki with Jinx (and Sammi) 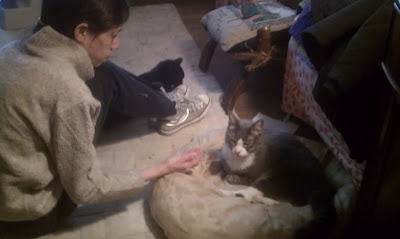 Above: Offering Reiki to Jinx (grey and white cat) with one hand and Sammi (black cat) with the other
Today I went to work with my friend Jordyn's (http://dancingminddesign.com/) cat Jinx, who has been losing mobility in his back legs, due either to a disk problem or tumor. It's been a couple of weeks since I saw him, and he did seem weaker in his back end when we started out today. Sometimes he will walk on his feet knuckled-over, drag one or both back legs, or collapse. This has been ongoing to some degree but did seem to be worse initially today. 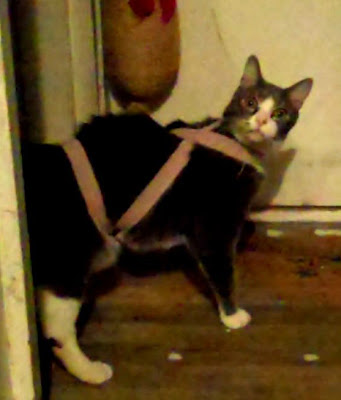 First I worked with him with a TTouch half-wrap on, which seemed to help his awareness right away. He began to use his back feet more and was falling less. As he moved, I was doing connected TTouches going down either side of his back, as well as some TTouches on his hind feet and legs. These also helped him to get some more connection. The above pic is from a previous session, but is to show you basically what the wrap looks like. Please visit this link at my youtube channel for a demo of the wrap, plus demos of many other TTouches: http://youtube.com/sarahsuricat. 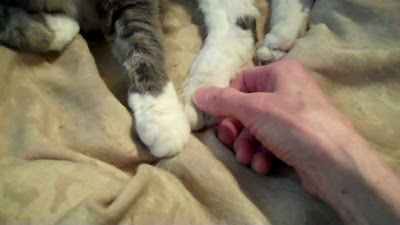 When he was tired, he curled up on one of his cat beds and I began to offer Reiki energy to him, first from a short distance, and then hands-on. His eyes closed and he began to stretch out. I also did little raccoon TTouches on his hind feet, in between the toes, on the toes and feet and up and down the legs a bit. Sometimes I used my thumb to do the TTouches, stabilizing my hand with my index finger. Below, he nudged my hand with his paw, as though to connect further. 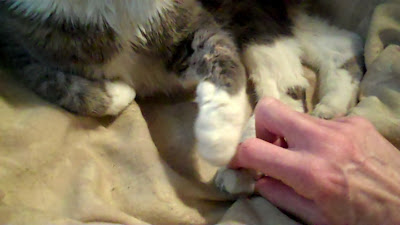 While I did this, Sammi, another of Jordyn's cats, was on the other side of where I was sitting, rubbing against me as she is in heat (she will be spayed soon!). She was craving the energy as well, and calmed as I put one hand on her back, and then her belly. Both of them calmed as I did this.

After a while, Jinx got up, walked around some more, then settled on a cat bed again. Again, Sammi settled on the other side of me, so I offered her Reiki as well part of the time (with one hand on Jinx and the other on her). I started out with one of my hands on either side of Jinx, close to where he was, and ended up with my hands around his shoulder area, or the brachial chakras. I felt a very strong connection and the energy being pulled into his body, and I visualized it traveling down his body to his hind legs. Later on, he shifted so that one of my hands was over his lower back around the base of his tail, and so I sent the energy to first his sacral chakra and then his base chakra, again feeling and visualizing the energy going into his body and down his legs. I literally felt it pulled there as well. We spent quite a good amount of time there. The energy in the whole apartment felt very peaceful. 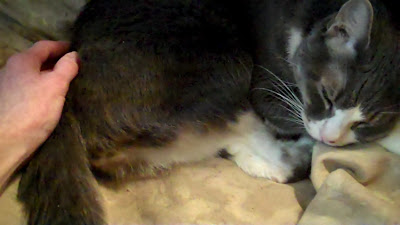 When I felt he had enough, I ended the session. When he got up to walk again, Jordyn said that he was doing much better than he had been before.

Much love to you Jinx, Jordyn, Sammi and the rest of the Jordyn's furry ones. Look forward to seeing you all soon.
Posted by sarahsuricat at 3:28 PM