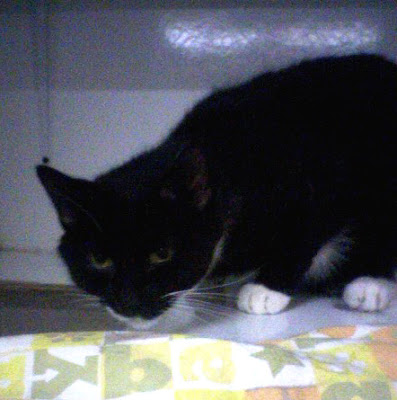 Harry (above) is a new arrival at the boarding facility where I work with rescue cats through Tavi and Friends & the Mayor's Alliance. He was hunched in the back of his cage when I arrived. I opened the cage very quietly, speaking to him a little bit in a soft voice. He meowed, but it seemed like a frightened meow, so I decided to try to first make contact using the back of the hand part of a long-handled back scratcher. The tool seemed to frighten him, so I gave him a break for a few minutes, and decided to try with a softer surface.
I took out a long-handled flat paintbrush that is 2-3 inches wide, and began to gently stroke him under his chin. This immediately really clicked with him, and he began to rub himself against the brush, and against the surfaces of his cage, eventually stretching and rolling around. It was very sweet to see! I would stop for a few seconds to give him a break, sometimes closing the cage, then started again. Little by little he became more and more comfortable, venturing forward in his cage, and I was able to do some TTouches directly with my hand as well as with the tool. I did chimp TTouches with him, which use the back surface of the middle digit of the fingers (see my youtube channel for a demo, http://youtube.com/sarahsuricat), as back surfaces of the hand are less intense than the front surfaces. I mostly used the paintbrush though, as I wanted to make sure that he felt very safe. It is important, too, to realize and be sensitive to the fact that a tool or technique that works for one cat may not work for another cat, and that even working with the same cat in multiple sessions, their tastes and preferences can change.
By the end of the session, he was so much more comfortable than in the beginning, and I feel that it will not take him long for him to come more completely out of his shell. Most cats are very terrified when they are first rescued - and some have their true personality buried very deep, but others just need to shake of the initial fear and then rather quickly become friendly and quite comfortable. But it is essential to be very sensitive to what they are ready to do, and not push to achieve a pre-conceived agenda. What animals remind me of every day is the importance of truly being in the moment.
Much love to you Harry!! see you soon! xo 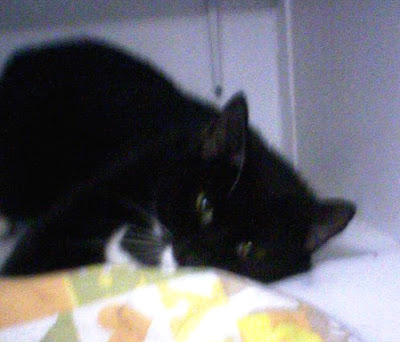 Posted by sarahsuricat at 9:32 AM