Connecting with Krishna, Feb. 2012: Day 3: The Comfort of a Soft Brush 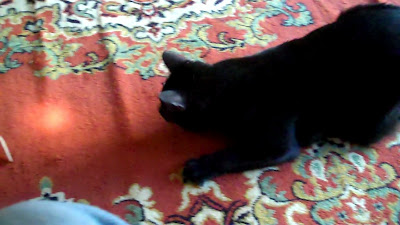 Today was my third day cat sitting for Krishna, who is fearful of people other than his guardians, Rebecca and Tim, so when they are away, it is especially hard for him. We have been doing well though, and I have found that a combination of play and relaxation techniques have helped me to feel a stronger connection with Krishna. One of the most important things for me is to respect his space and what is is ready and comfortable to do. It is OK to nudge those boundaries a bit in order to move to the next level, but a very gentle nudge.
Today when I entered the apartment, he was irritated at first, greeting me with a loud meow and hiss. I'm sure he is missing his people, and he was also hungry. As in the past he has pounced on other cat sitters' feet, my approach when this happens is to stand very still sending Reiki, as he gets in a bit of a stalking mode and is more apt to pounce if I move at that point.
As I continued to send the energy he calmed down, actually pretty quickly, and laid down to wait for me to fix his food.
He ate a little, then looked at me as though he was ready to play. So for a while we played his favorite game to play with me, which is chasing the light from the flashlight as I move it around. He can really get going!!
After he was done, he ate a little more and was in a more relaxed mode. 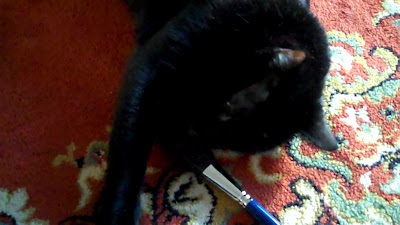 Then I took out a very soft paintbrush - it looks like a makeup brush but with a longer handle, which works well with him as it is good to have more distance, at least in the beginning. He was very curious about the brush, sniffing it a lot and began to rub himself against it a bit. Perhaps it was something about the texture of the brush, but at this point he got very cozy and he began to roll around and rub himself all over rug. I have seen this reaction sometimes with shelter cats who are initially very frozen but there is something about the paintbrush (or other tool that I use with them) that helps them to feel a LOT more at ease, and they begin to roll around on their back and stretch out etc. 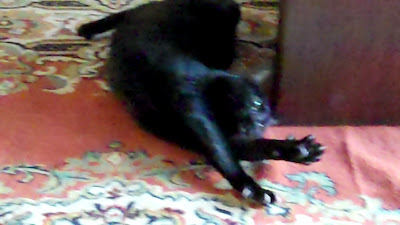 I stroked Krishna a bit under his chin with the brush, and then a little on the side of his face, but I found he was more comfortable if I put the brush on the floor and he rubbed himself against it. At one point he was on his back and touched his nose right to my hand. I just stayed still, not wanting to startle him. At that point he was stretched out right next to me.
I feel so honored when a very shy cat lets his guard down that and is able to trust me enough to be so close to me.
I felt such a strong connection to Krishna today - I think the brush helped us to make a wonderful breakthrough. 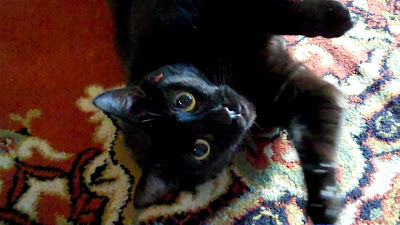 Shortly before I left I was speaking to a friend on the phone and, instead of going back into the bedroom for some private time, as he often does when he has had enough socialization with me, he actually followed me back into the living room, sitting near me and blinking! xo 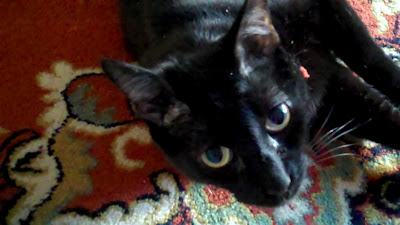 Posted by sarahsuricat at 12:19 PM