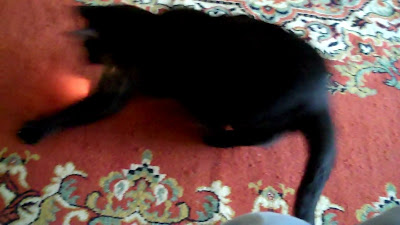 Today when I went to cat sit Krishna, he started out with a hiss - I'm sure he is missing his people. So I just stood still, sending him Reiki energy, and he quickly settled, sitting hear his food dishes, waiting for me to feed him. He ate a little and then we played the game he loves to play, chasing the light from a flashlight. This seems to be a good way for him to get pent-up tension out, and generally after that he is more open to receiving TTouch and/or Reiki. He really can tear around! and if I stop and put down the flashlight before he is ready to stop, he comes up to the flashlight, nudging it, as though to prompt me to continue :) 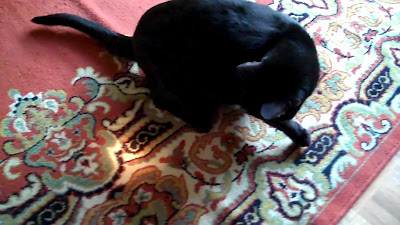 After he took a break from playing, he ate some more, then came back on the rug, where I was sitting. I did a few TTouches on him, using a long-handled paintbrush, but thought it better to just get him comfortable being near me without him being scared of being touched. He is very comfortable with his people touching him, but very fearful of others. So we sat quite close to each other and I began to send him Reiki. He got more and more at ease, and eventually he stretched out, extremely comforable, looking at me. I felt such a peaceful vibration in the room. It is such an honor when a shy cat feels enough trust to really start to let his guard down.
I know his eyes look pretty big in the picture below, but this is actually a much more relaxed gaze than we started out with :)
Thank you Krishna, see you tomorrow!!! 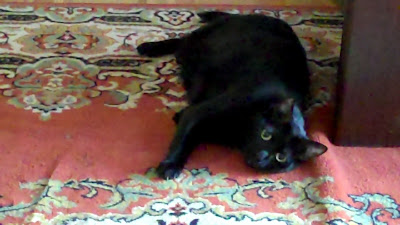