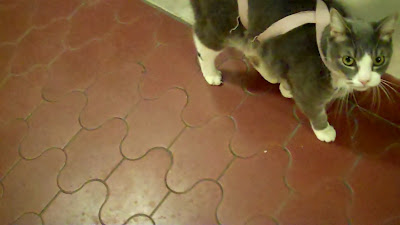 Yesterday I went to work with Jordyn Thiessen's (http://dancingminddesign.com/) kitty Jinx. Jinx has been having mobility issues, either due to a disk problem or tumor, and has been having trouble using his back legs. Over the past few sessions, I have been using a TTouch half wrap, full wrap, and a bit of a candy cane wrap with him. Though he still clearly has trouble, and tends to bring the middle part of his back up and sort of swivel his hips to make his legs move, I have noticed that he does seem to use his back feet more than I had seen before, and he seems to be retaining some of that feeling without the wrap.

When I arrived at Jordyn's apartment, Jinx was very cute, it seemed as though he was showing off for me, showing me what he could do without the wrap on. There are steps which lead up to the bed, and Jinx climbed up and down these, really using the pads of his hind feet, instead of dragging the hind legs along. He did this both going up and down the steps, and did it several times during the session. He also walked up and down the apartment, using his legs quite well for him. Sometimes he loses the feeling and will drag the right hind leg a bit, the top of the foot dragging on the ground a bit, but overall he seems to be using his legs more completely than I observed a couple of weeks ago before we started using the wrap. 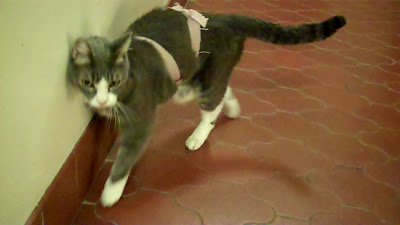 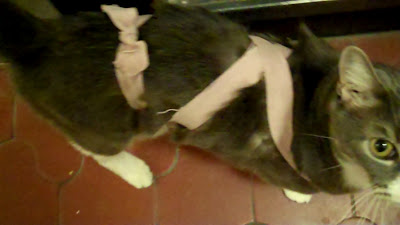 as well as the full wrap, which I made by adding on to the half wrap and wrapping around each hind leg (sorry, no pics of that this week). We also tried using the back half of the wrap to do a kind of candy cane wrap around the two hind legs. I looped the second wrap through the back part of the half wrap and then wound each side around each hind leg, tying around the bottom. Not quite sure if this is an official TTouch configuration, but it did seem to help remind him of the feeling in the legs. I didn't leave it on long, as it seemed to be a bit much for him, but it felt like it was a good idea to try for a short bit, just to bring his awareness to the legs. 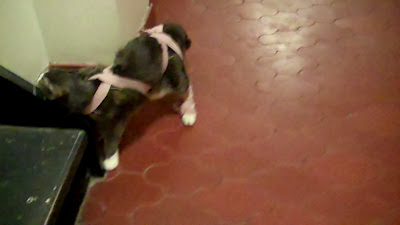 I was also intermittently doing some TTouches on him - connected circular TTouches going down his back, some TTouches going down his hind legs, etc. After several forays up and down the hall, I took him back into the apartment space. We did some walking work there too, then gave him some treats and a rest on his bed. While he sat on his bed, I did some Reiki with him, as well as some TTouches on his hind legs and feet. I did clouded leopard TTouches going down his hind legs, then some raccoon TTouches on his hind feet. I did even teeny tiny circles on his toes, and then held each toe one by one, doing the smallest possible circle with the toe. Trust me when I say it these were small circles with the toes, barely a movement at all. This work is very careful and subtle, but these subtle movements have the very powerful effect of helping to bring awareness of what is at the root of these movements, and ideally to retrain the body how to move in the most efficient manner, or to be as balanced as possible in any given situation, even one that may continue to be compromised.

The Reiki helped Jinx to be very calm and relaxed and he started to groom himself, seeming to tell me he was done. Thanks Jinx, look forward to seeing you soon!! xo 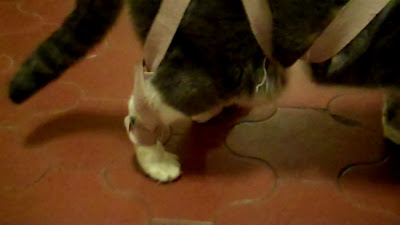 Posted by sarahsuricat at 12:02 PM