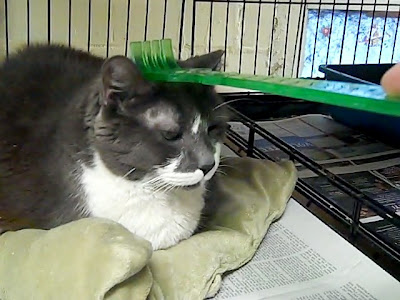 Quinn is a beautiful big cat who is extremely wary of humans, and seems to be wary of other cats as well. When he gets frightened or irritated, his most usual response is to yell and swat very hard. He was dumped at the shelter some months back, and I have made gradual but steady progress with him. I have also showed some of the volunteers how to make contact with him using a tool such as the plastic back scratcher or paintbrush shown in this post. It really makes a difference to have a number of people working with him. Now, unless you work with him past his tolerance level, he generally will settle into it. And, if he does decide to swat, the swat will generally reach the tool and not your hand.
After a while of making contact with Quinn using the back scratcher, doing little circular TTouches and strokes around his head area, I found him to be particularly relaxed and in a sleepy mode. As I was a bit nervous about going to the next step, I made sure that my breath was really flowing and that I was as relaxed as I could be. I was sending him very gentle energy, and doing my best to quiet my mind. Gradually I worked my hand down the back scratcher and began to do some circular TTouches using the back of the tip of my finger, as shown here and in the next photo below. 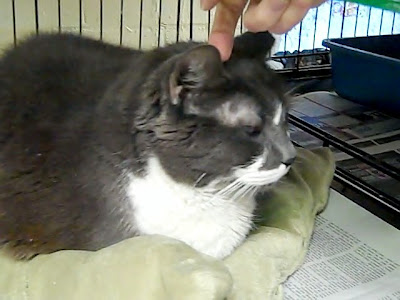 His eyes were still closed and sleepy, so I continued for a few moments. I wasn't sure how he would react once he felt the change from the plastic to the warmth of my finger, but I actually was feeling him relax into my touch. So as not to push the issue too much, I then switched back to using the back scratcher again. 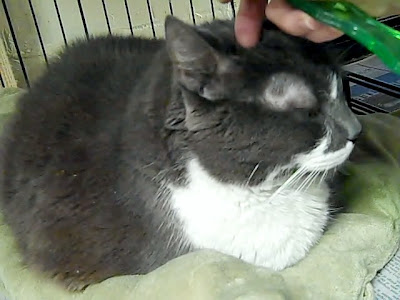 The next photos are from a week or so later. Recently I have found that he seems to be even more receptive to the feel of the paintbrush than he was to the back scratcher, and now I will actually feel him rubbing more actively into the touch, as though he really is enjoying it. I let him sniff the paintbrush first, and often now he will start to rub the side of his face against it. 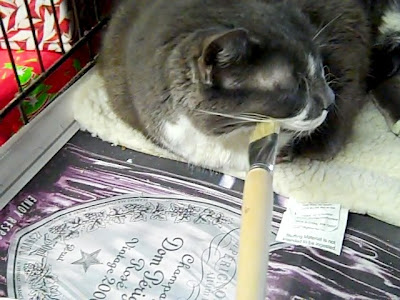 And, this time he was sitting right in the front of his cage, instead of being way at the back of his cage, which used to be his normal place. Very often, these days, he will be hanging out towards the front of his cage. He got extremely sleepy as I was working with him, and laid his head down, so I gently began stroking him and doing circular TTouches using the back of my hand, as shown below. It was so wonderful to feel and see him so relaxed.
In my mind's eye, lately I keep picturing him climbing out onto my lap and settling there. I told him that is my New Year's resolution for him. Love ya, Quinn!! 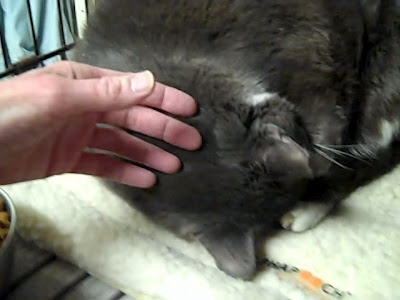 Posted by sarahsuricat at 12:40 PM