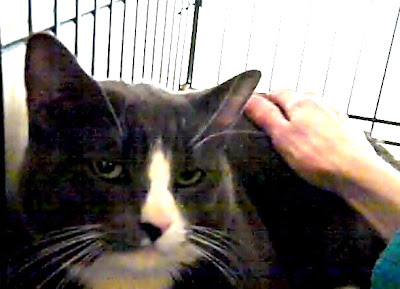 Lord Greystoke is a beautiful grey and white who arrived at BARC shelter after his owners were evicted. He was terrified at first, cowering in the back of the cage, looking as though he was frozen in that position. When I first opened his cage, he hissed at me, so I started out by doing gentle TTouches with him using a paintbrush. He began to relax his body, and as I went along, I gradually began to work my hand down the paintbrush til I was touching him with my hand. Very slowly he began to stretch out his body a bit and did a few sighs, really letting go. When I see those sighs that look like the animal is finally really letting go, it touches my heart so much.
From then on I found that I could touch him directly with my hand. Each day he has responded a little more and a little more, first by rubbing his face and head against my hand, then his body against my hand, as I was doing circular TTouches and gentle strokes on his head and body. Sometimes I would bring his food bowl from the front of the cage to where he was, and he was very comfortable eating in my presence. Initially I was doing a lot of TTouches using the back of my hand, as that is less intense than the front of my hand, but now I can do all of the types of TTouches with him.
Often he especially responds to TTouches around the outside of the mouth area. The mouth area connects with the limbic system, which relates to the emotions, so this makes a lot of sense. 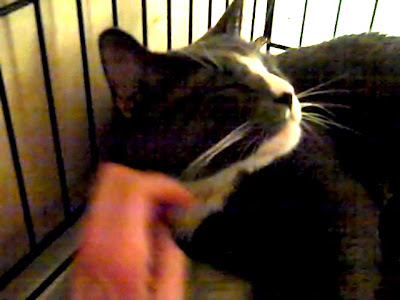 When I am working with him, I am completely in the moment with him, completely connected with his being, and try to imagine a bubble of light around us, to help him to feel safe.
Sometimes I would stop and send him Reiki for a few minutes, to help him to relax further.
A few days ago, he began to stand up and walk towards the front of the cage, which was a big step for him, as most of the time when people are around you see him lying down. He came all the way to the front of the cage and began to eat his food. Now when he sees me open his cage, he will usually get ready to stand up. 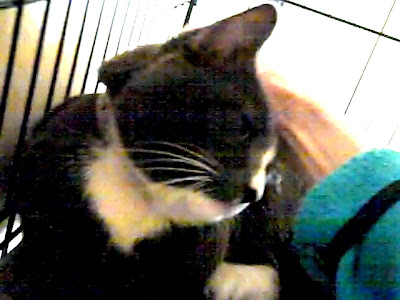 Yesterday he surprised me by rolling over onto his back and pushing into my hand for belly rubs. It is such a pleasure to see him become so much more comfortable, and I feel that soon he will start to be less frightened when unfamiliar people come into the shelter and want to interact with him. Yesterday he was also staying in the middle of his cage, rather than all the way at the back, which was a great step for him as well.
It is beautiful to see him really coming out of his shell, and to experience the gentle, loving being that he is.
Posted by sarahsuricat at 12:38 PM