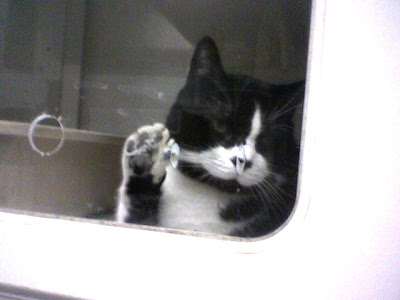 This is King Kong, a rescue kitty from the Mayor's Alliance who I have been working with for a while through Tavi & Friends' TTouch-in-Rescue program. He had not been in the holding space for a while (possibly fostered), and then was returned recently. Since his return, he has been more shy with others than he had been before, and I had been told that often he wasn't coming out of his cage readily, as he had before. He has still been very friendly with me but when he comes out of his cage to make contact with me, generally he has been more interested in wandering about than in a lot of contact. and I was always a bit careful so as not to get him overstimulated. As he has seemed a bit on edge, I generally do TTouches with him using the back surfaces of my hand and fingers, as these Ttouches are less intense. I let him wander around, use the scratching post or play with a toy, then call him to me and he will come over, usually rubbing against my legs or against my hand as I do some Llama TTouches (circular TTouches using the back surfaces of my fingers) or chimp Ttouches (using the back surface of the middle section of the fingers) with him.

But today was really different. Sometimes I may be working with an animal at a certain level for a while, then one day our connection just clicks in a different way, and we move to a new level of connection.
I started out as I usually do, with llama TTouches and strokes using the back of my hand as he walks back and forth by me. Then he got a bit more settled, and I did some Reiki with him from a short distance, and I felt him much calmer than usual.
After sending him Reiki for a while, he just laid down calmly, and I began to do slow raccoon TTouches on his forehead. I felt him completely relaxed and totally in the moment with me and with the TTouches really settling into the peacefulness of the circular TTouches, closing his eyes, really letting go. I felt that direct heart connection that I often feel when some of the tension is able to truly fall away. Even the air and the space around us felt very quiet, just him and me connected and in the moment. He laid down next to me and stretched out, and we really connected on a much deeper level. It was beautiful to experience him truly relaxing and leting go. It was hard for me to leave today. When I leave, I always hold my hand up and send them energy and tell them I love them before I leave. Today he responded by waving goodbye to me, as you see here.
Love you, King Kong! xo 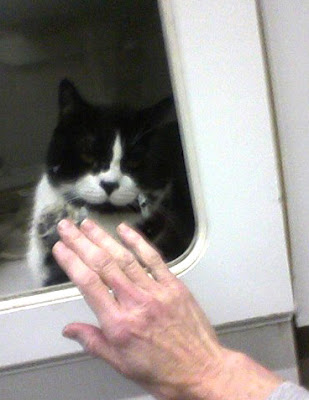 Posted by sarahsuricat at 6:40 PM