Staying in the Moment with Pip 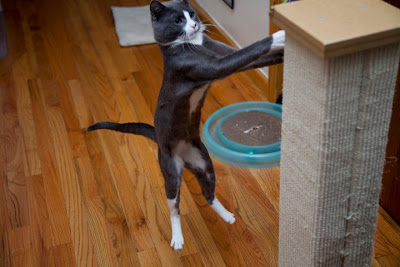 Above: Pip in energetic mode - photo by his owner Sarah - thanks, Sarah for letting me use a couple of your
spectacular Pip pix for the blog post :)
Hi folks, thanks to a referral from my Reiki teacher Sheryl, I recently had the pleasure of working with the lively and intelligent kitty Pip and his people, Sarah and Chris.

They rescued Pip a couple of months ago from a dumpster not far from where they live. He was apparently in pretty scruffy condition when they first rescued him but they have done a great job with him, taking great care of him, getting him veterinary care, etc. He now looks healthy and in great shape.

I was contacted because, though Pip can be the most gentle, cuddly fellow you can imagine, when they are sleeping -- or, I should say, trying to sleep! -- he can turn into a little wildman, crying a lot and rampaging around, etc.

So I met with them to work with Pip, share some of the TTouches with his people, and to find out more about Pip so that I could make an appropriate Bach flower remedy for him. 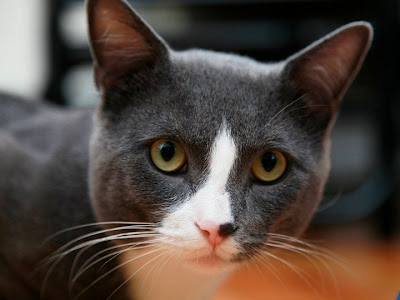 Above: lovely portrait of Pip by his owner Sarah

As you can tell from his pictures, he is a very alert, inquisitive guy, so I suggested that they might want to try doing some clicker training with him or some more interactive type of play, such as a confidence course of some kind, which does not need to be made w/the orange cones I use in the link. It can be made using objects you have in your home. Or you can make a small labyrinth using rope or something similar. With a young, energetic cat, it is wonderful to stimulate both their mind and their body with interactive activities like these.

I started out with Pip sitting on the floor, letting him come to me and doing just a few TTouches at a time, giving him breaks in between. Sometimes I showed the TTouches on a stuffed cat as well, so that I could slow down and be a bit more clear to his people about what I was doing.


I first did a few TTouches which use the back surfaces of the hand, such as the chimp TTouch and the llama TTouch, as these TTouches are less intense and less apt to trigger him into being overstimulated. I then showed them some of the other TTouches such as the clouded leopard TTouch, the raccoon TTouch and the abalone TTouch. You can find videos of many of these TTouches on my youtube channel: http://youtube.com/sarahsuricat.

I also showed them the ear work, explaining that there are many acupressure points in the ear, so that can be extremely relaxing. The mouth work will also be very important for him, as that can be calming since it connects with the limbic system, which affects the emotions.


Pip started out in a bit of a squiggly mood, but became increasingly relaxed as I worked with him. By the time I got to the mouth work (doing raccoon TTouches all along the outside of his mouth are), he was quite relaxed and spread out.


Then I wanted to show them about the possibility of touching him with a tool such as a paintbrush or feather if he starts to get revved up. And that is when Pip taught me something more about himself :) The feathers prompted him to start to get more into a play mood, a more lively mood - as he wasn't so interested in being touched with them as he was in playing with them. So that was actually a chance to see what TTouches might be useful in calming him. Previously, I had mentioned the zigzag ttouch but thought it might be too stimulating for him.

However, at that moment I intuitively began to do a zigzag TTouch on him rather slowly, and he did an almost immediate shift. I realized that since the zigzag can be such a great connecting TTouch, for Pip that touch at that moment was really helpful in bringing him back into his body. 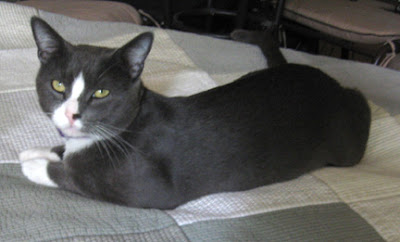 Above: I snapped this after the TTouch session
I tried the octopus TTouch on him as well (which is like a double zigzag TTouch), and that one was too overwhelming for him, but the regular zigzag TTouch worked really well.


Sarah and Chris were both really adept at picking up the TTouches - I had them try them on the stuffed cat, and they really understood how light the touches are, etc. I often find that people tend to do the TTouches with too much pressure or too quickly. I know they will do a great job with him :)


The next day, Chris told me that Pip had been really great that night, extremely relaxed, and that everyone had had a restful night. Thanks so much to all three of you, and I look forward to further reports about Pip. He is a special being, and he is so lucky to be with such caring guardians in a wonderful home.

And thank you Pip for reminding me that, as always, it is best to truly be in the moment with the animal in order to feel what is most beneficial to do with the animal in that moment in time. I think it is important, too, to be flexible with our ideas about what TTouches are most appropriate for what situation, as that can fluctuate according to the particular animal and the mood of that animal.
Posted by sarahsuricat at 2:22 PM