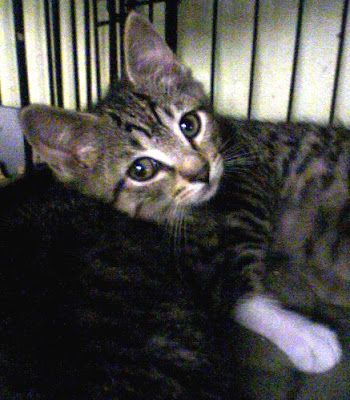 Recently, a group of 5 feral kittens arrived at BARC shelter, and I was asked to work with them to help them to be more comfortable and to be more at ease being touched by people, which in turn helps them to be more adoptable animals. And of course we want these little babies to all have homes soon :)

Initially they were terrified, squished up against the back of the cage, moving very little. They would often wait til people weren't walking by or watching to come forward to where the food and water bowls are. They hissed when you opened their cage or moved your hand towards them.

Before I began to try doing TTouch with them, I sent them Reiki from a short distance away. I could see them start to relax with the soothing Reiki energy.

To get them accustomed to being touched in a non-threatening way, I started out by using a very long feather to touch them. I did little circular TTouches and strokes with the feather, around their head area and then working in some touches going down the body. Little by little I noticed their muscles start to relax and their breathing began to slow down (they were nervous so you could see that their breathing was sped up as well). 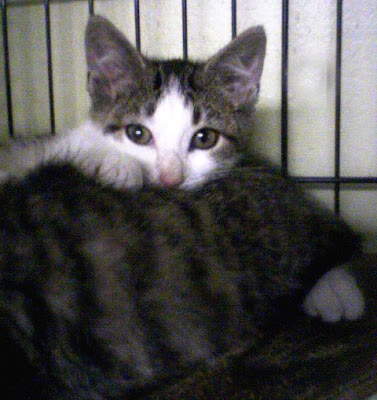 The circular movements of TTouch are a non-habitual movement, so often when you begin to work with an animal doing these touches, you will see them stop in their tracks and look at you as if to say, "wait a minute, that feels different!". Usually they realize the touches are very gentle and do feel good, so little by little you see the behavior and body language change.

It wasn't long before I was able to work my hand down the feather to begin doing TTouches with my hands. I found that doing little raccoon Ttouches around the outside of the mouth area (which is connected with the limbic system, which has to do w/emotions) and doing ear strokes (there are many acupressure points in the ear) were particularly helpful in soothing these little creatures.

Since there are five kittens in the cage, I would work on one for a little bit, then go to another, so as not to overwhelm them. The kittens not being worked on would often watch and look at me wondering what was going to happen next. 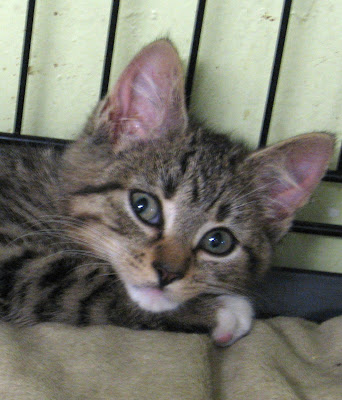 As the kittens grew more accustomed to me, the hissing was less and less and then stopped altogether. Below are two of the little ones looking very relaxed indeed! 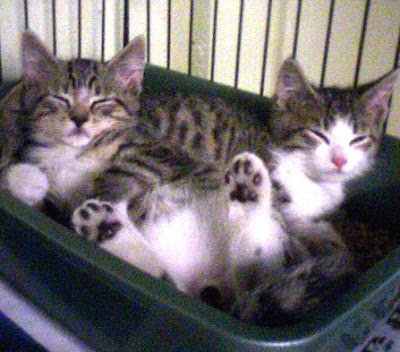 After a few sessions with them, I also noticed that they were starting to figure out how to play. Another kitten from a different litter was put in their cage temporarily and, I think, helped them in this process too. 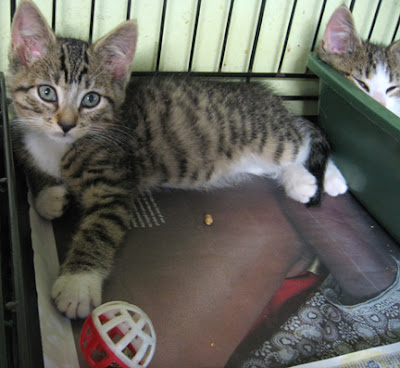 In the pics above and below, you can see one of the kittens experimenting with playing with the ball. Within about a day after this or so, they all were playing with balls and other cat toys in their cage. 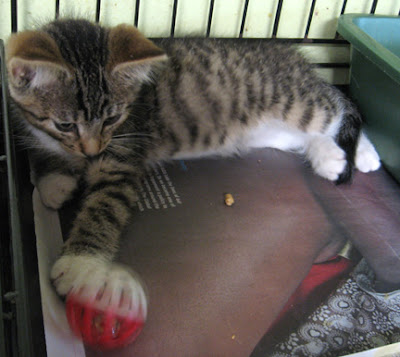 After some sessions with them, it was time to take the next step and get these little ones used to being picked up and held. They still were running away initially when most people were trying to pet them.

First of all, I did a few gentle belly lifts with them (see my youtube page, http://youtube.com/sarahsuricat for demo), then began to just scruff them a bit and gently lift up under their stomach. Then I took a small towel, scruffed with one hand and then held underneath with the other hand holding the towel, then brought the kitten onto my lap, gently wrapping the kitten in the towel if I thought it appropriate. I did the picking up and putting on my lap pretty much in one swift motion, so they didn't have time to get scared about it, and once the kitten was in my lap, I began to do some little TTouches either directly on the body or thru the towel, and the kitten relaxed right away, stretching out. I found that I had pretty much the same reaction, even with the two most scared of the kittens (which happen to be the two ones which have more white fur, who are seen cuddling together below, hard to tell where one ends and the other begins!). 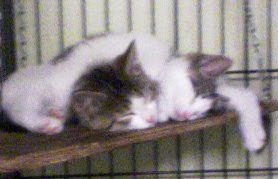 The following Saturday I had several other volunteers holding the kittens as well, as it is good to get them used to various people holding them instead of only being comfortable with one person. Since that day, they have more and more attention from volunteers, as it is easier to pick them up and handle them. 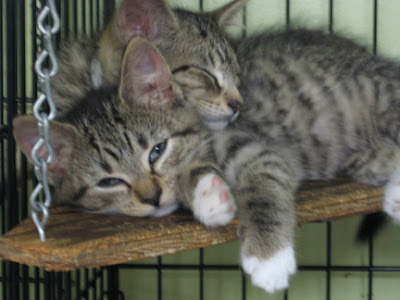 The two shyest kittens are really coming around, too. Below is the little girl, named "Arctic Fox", who is the smallest one as well, and below that is "Pearl Harbor", her brother. Both of them really relax into my hands now. 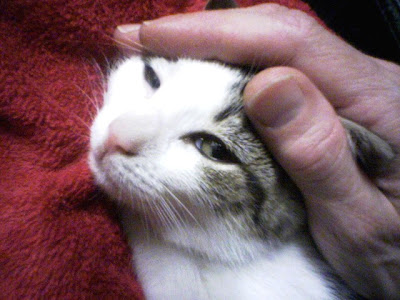 The day before yesterday, the last time I was at BARC, I spent an especially long time with Pearl, who is the most reluctant one. Though he is comfortable once I touch him, sometimes he will run away if someone reaches towards him. I held him in my lap, offering him Reiki, and heard and felt him do a couple of big sighs, as though he was reaching a level of relaxation that he hadn't felt in a long time. He really stretched out and let go.

When we were done, I returned him to the cage and about an hour later, opened the cage to work with the kittens within the cage, to work with the ones who still may run away on initial contact to be more comfortable so that they don't do that. Pearl started to run away from me (maybe it's still a bit of a reflex?), but I did a little TTouch with him and he settled down. I then focused on a kitten who was laying on a shelf at the opposite end of the cage.

This kitten (named Normandy) had come around the quickest, and is comfortable laying on his back for belly rubs. As I was starting to rub his belly, little Pearl came running over, jumped on the shelf, and snuggled right alongside Normandy so he could have some TTouch as well.

This was such an unexpected delight, and was a real breakthrough for this kitten, as it was the first time he came to ME for attention. I felt so much pure love and affection from this little one as he snuggled alongside his brother so I could TTouch them both at the same time.

Thank you, little ones, look forward to seeing you soon unless you are adopted, which would be even better:) and thanks to all the gals and guys (volunteers and staff) at BARC who have helped these little ones! 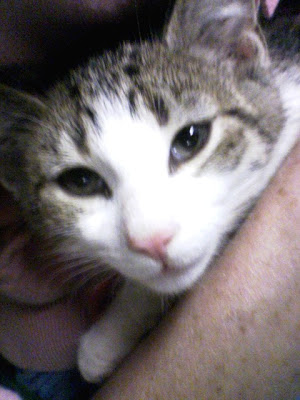 Posted by sarahsuricat at 9:41 AM