TTouch and Reiki with Bonsai and Nilo 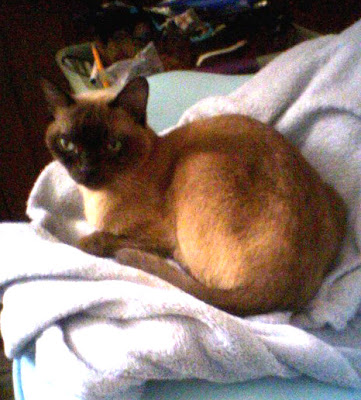 The other day I went to work with Bonsai and Nilo, two sweet cats who I have worked with for a while, but had not seen in some months. Bonsai (above and below) is a gentle senior Burmese cat, who has had seizures from time to time. He is on medication, and I have showed Kristin (the cats' owner) how to do some of the basic TTouches so that she can regularly do them on both Bonsai and Nilo to promote relaxation and balance.

Bonsai was resting in one of his cozy places, so I began with him. I started out by offering him Reiki with my hands a little distance away. I found that the most heat was emanating from his heart chakra. It felt very warm at first and began to dissipate as the session progressed. I also worked with the other major chakras. As I worked, I felt him starting to purr. It was lovely to see him so relaxed.

After the Reiki session I also did TTouch on ears, as well as circular ttouches on body and forehead. He continued purring and was just so relaxed. What a gentle, dear soul he is. 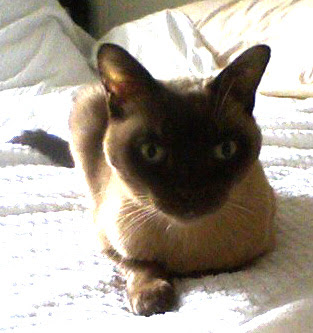 At that point Bonsai was resting very comfortably, so I then went to see what could happen with Nilo.

Nilo is a young, very active kitty who tends to run away from people other than his human mom, who he is very bonded with, though I have been able to have more and more contact with him as time has gone on. Initially I could only touch him with the wand, but little by little I have been able to do short TTouch sessions with him directly with my hands. 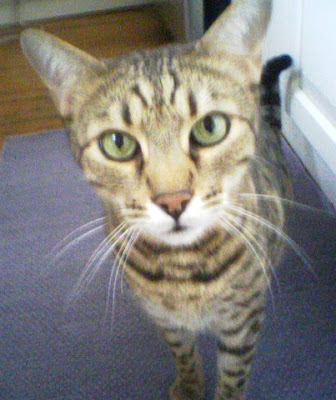 Today he was hiding behind furniture, as he often does to begin with. I tried to contact him using a long dowel with a piece of ace bandage wrapped around the end (we call it a "corn dog", which he was receptive to in the past. Today, he just seemed to be afraid of it, so I had to try another tactic.

Then he moved again, and I was able to make contact with him for a much longer time after he went into a little box with a door on the cat tree. He felt extremely safe in there, and he started to purr up a storm. This is the first time I have heard him purr while I have been TTouching him, and he has a very loud PUURRRRRR! It was such a pleasure to hear this. This was the most connection I've had with yet!

While he was in this little space, I did mostly llama ttouches (circular TTouches using the back of the fingers) on his body and abalone TTouches (circular TTouches using the whole hand). Then I did Ttouches with back of a finger (often just my fingernail), around his mouth area and forehead, and around his ears. He was especially responsive when I did this around the mouth area, which makes sense as this is connected with the limbic system, which has to do with emotions. He revved up his purring again, this time even louder, and began to push himself into my hand. This was a new big step in our contact with each other.

After the session, I spoke to Kristin and her daughter about what had happened. Her daughter said that Nilo generally runs away from her when he's out in an open space, but he will let her pet him when he is in a more enclosed space. I encouraged her to continue to contact him when he is in a comfortable space. I feel that over time, he will be more comfortable with her touching him out of the space.

I gave Kristin a spritzer bottle with 10 drops of rescue remedy in it and the rest filled with water. I suggested that she spray it on places where the cats like to hang out, as this can promote even more comfort for them in those places.

The day after the session, I met with Kristin to give her bach flower remedies which I had made for the cats. When I entered the apartment, Nilo was resting on a couch, looking completely blissed out. He didn't move when I came in, which was different behavior for him. he was just stretched out and cozy. She said that she had sprayed the rescue remedy spritzer onto the sheet which was on top of the couch, and that he had cuddled right into it. Kristin also told me that when she woke up that morning, Bonsai was smiling, that it had been quite a while since she had seen him smile :)

Thank you all, it was a pleasure, as always to work with you :)
Posted by sarahsuricat at 11:27 PM